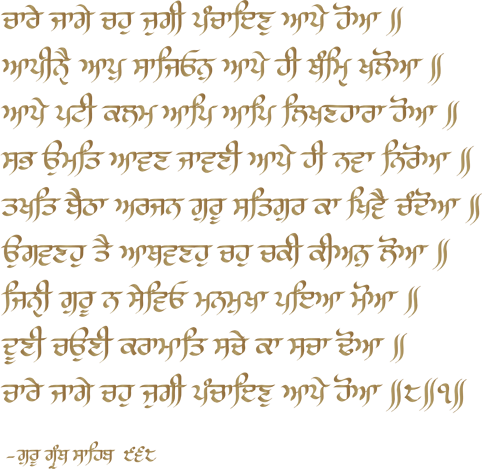 In the eighth composition, Satta and Balvand praise the authority of Guru Arjan by helping us understand that the source is the same. Giving authority to Guru Arjan - the source is the same. The liberators of the four ages, the four Gurus, awoke. The Source of the five elements, IkOankar (One Universal Integrative Force, 1Force, the One), by Own-Self has manifested as the fifth embodiment, Guru Arjan. The Self, the One, created Guru Arjan and decorated or beautified Guru Arjan. That Source by That Source alone has created Itself, by Self alone is standing, having supported creation. IkOankar is described as the One who is immovable. The One is the slate, the One is the pen, and the One is the writer. Knowing the history of Guru Arjan, this is a line that is of note, as Guru Arjan was the one compiling the Adi Granth, the first recension of the Guru Granth Sahib. Guru Arjan is using slate and pen and acting as the writer, so there is some clear historicism here. Satta and Balvand are seeing this while writing Ramkali Ki Var and situating that process of compilation in the larger context of the One as the slate, pen, and writer.

The entire nation or community is subject to coming and going. Everyone is subject to coming and going, birth and death. That Source, IkOankar, by Own-Self alone, is ever-new and diseaseless. This entire nation or community started with Guru Nanak, and within that community, people come and go, live and die. IkOankar is the only constant. In this community or nation, Guru Arjan is sitting on the throne! The Guru’s canopy has been established on his head. He is next in line. From the rising of the sun to the setting of the sun, he has spread light in all four directions. Guru Arjan has spread illumination far and wide, and this is part of that complete miracle that the Bards refer to in the earlier lines. That miracle is being doubled and quadrupled, and so on, exponentially. Guru Arjan has already gone through various tests and is driven by his connection to the One. Without it, he is in separation. Without serving the Guru, we are self-centered beings fearful of death. We live our small lives and do not connect with the vastness of the One through the service of the Guru. We spend our time worrying about only the things in front of us, and we lack the perspective that the illumination of the Guru gives us.

The miracle of the passing of the Guruship is twofold and fourfold, as Guru Arjan begins the process of compiling the Guru Granth Sahib with the compilation of the Adi Granth. The sangat (collective) is increasing, and they need more access to Sabad outside of coming to see and hear from the Guru physically. Guru Arjan is developing multiple sarovars (pools), baolis (wells with steps leading down to the surface of the water), and wells, along with the city of Amritsar and Tarn Taran. And he is starting this all at the age of eighteen because, by this time, he has already established to Guru Ramdas that he is in longing and driven by longing. The miracle is multiplying because what Guru Ramdas started has now been transferred to Guru Arjan! The work that began with Guru Nanak is being multiplied and multiplied. The liberators of the four ages awoke, and the source of the five elements, IkOankar, has by Own-Self manifested as the fifth embodiment, Guru Arjan, who is next in Command and next in the rule of Guru Nanak’s Raj. Guru Arjan continued the Raj started by Guru Nanak. The miracle has multiplied. Do we feel that miracle? Do we feel the illumination of the Guru spread far and wide? Will we serve the Guru in order to get to that feeling?

This pauri describes the glory of Guru Arjan Sahib and of him gracefully sitting on the throne of Guruship.

The phrase ‘cāre jāge cahu jugī’ (the liberators of the four ages, the four Gurus awoke) of the first line of this pauri is a symbolic statement. Through this, four Gurus (Guru Nanak Sahib, Guru Angad Sahib, Guru Amardas Sahib, and Guru Ramdas Sahib), the liberators of the beings of all four ages are being pointed out. The word ‘pancāiṇu’ (Source of the five elements) in the second phrase ‘pancāiṇu āpe hoā’ (source of the five elements by Own-Self has manifested as the fifth embodiment) in the same line expresses two meanings. One of its meanings is ‘IkOankar,’ and its other meaning is the ‘fifth embodiment,’ that is, Guru Arjan Sahib. Due to the different meanings of a word in two contexts, in literary terms, it can be categorized as a pun. This phrase means that IkOankar by Own-Self has appeared in the form of the fifth Guru.

Symbolism is effectively used in the sixth line. Through the phrase ‘ugvaṇahu tai āthvaṇahu’ (from sunrise to sunset, from sunset to sunrise), it is expressed that the Guru is spreading illumination constantly, at all times. Similarly, through the phrase ‘cahu cakī kīanu loā’ (he has spread illumination in all four directions), it has been pointed out that Guru Arjan Sahib has illuminated the four directions with wisdom.

The seventh line employs natural linguistic expression. Through accessible language, it has been stated: Those self-centered beings, who have not accepted the command of the Guru, are constantly in fear of death.