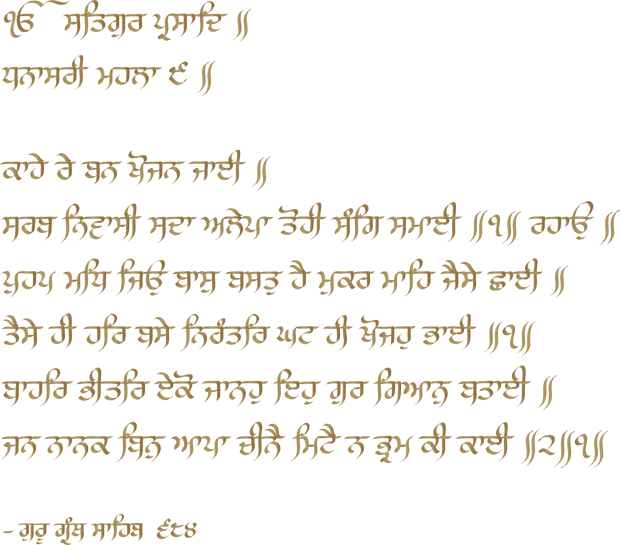 Dhanasari is a rag (musical mode) used to create a mood of happiness or cheerfulness.

In the first composition, Guru Teghbahadar says, O sibling! What do you go to the forests to search for? The One who dwells in all, the ever-detached 1-Light, is merged with you. In classical Hindu and many other South Asian conceptions of the four stages of life, the fourth stage was when a person was meant to detach from society and leave the world to attain some kind of liberation upon death eventually. The Guru addresses this classical element in all of us, the need for escapism and detachment from the world and all of its goings-on. We often feel that the only way to find the inner peace, connection, or comfort we are searching for is by separating ourselves from what it means to be in the world. We may go to a mountain or a forest, we may attend wellness retreats or do some kind of ‘cleanse.’ But we always have to come back, don’t we? So how do we find what we are looking for when we are in the world? The Guru tells us that what we are looking for, our idea of the Divine or God or Consciousness, whatever else we may be looking for, is not found in these remote places. The One we are looking for is everywhere, in all. The idea of sacred spaces is being questioned here — there is no place more sacred than another. We are sacred, so why not go within? There is no outside place we can go to that will give us this discovery!

O sibling! What do you go to the forests to search for? The Guru then brings in two metaphors to help us understand this constant dwelling of the 1-Light within. The Guru says that just as the fragrance resides in the flower and the reflection resides in the mirror, the 1-Light constantly dwells in the heart. Even if we cannot smell the fragrance, even if we cannot see the reflection, these things reside in the home of the flower and the mirror, respectively. We ought to search for the 1-Light only within the heart, the self. How do we go inwards to do this? It is an active process, one which the Guru sympathetically urges us towards.

O sibling! What do you go to the forests to search for? The Guru says that within us and without us, inside and out, we ought to recognize and acknowledge only the One. This is the Wisdom of the Guru, what the Guru illustrates for us. And it is this statement that creates a kind of conviction out of something, marking this statement as the Guru’s knowledge, the Word’s Wisdom. The Guru is making a non-individualistic and non-philosophical statement, the Guru is invoking a particular experience — the experience of acknowledging and knowing the One both within and without. The Guru then invokes the status of a votary or a devotee or a servant to state that one ought to recognize oneself, grasp the self, and fully know it. If this recognition does not happen, the mind cannot be satisfied, the scum of illusion cannot be removed, and doubt will continue to exist.

When we understand that the fragrance is inseparable from the flower, we will stop searching outside of ourselves for the One. When we understand who we are within and our small selves’ relationship with the larger Self, IkOankar (One Universal Integrative Force, 1Force, the One), we will rid ourselves of doubts and foster companionship with the 1-Light. Will we go internally and begin our search within the heart?
The creative and all-pervasive Force (IkOankar) is One, that is, unparalleled. IkOankar can only be realized through the grace of Wisdom (Guru). In Rag Dhanasari, Sabad revealed by Guru Teghbahadar Sahib.

O sibling! Why do you go out into the forest in search of IkOankar?
IkOankar, while being distinct from everyone in Their transcendent state, dwells in everyone in Their manifest state, and is also dwelling in you.1. Pause.

Just like the fragrance naturally dwells in the flower, and the reflection in the mirror,
IkOankar constantly pervades everyone; so instead of looking outside, search for IkOankar within your heart.1.

Recognize IkOankar, who is dwelling both inside and outside, to be pervading everywhere; the Wisdom (Guru) reveals this. At the end of the Sabad, by using signature ‘devotee Nanak,’ Guru Teghbahadar states: Without recognizing one’s origin, illusion, which originates from ignorance does not leave the mind. Without the removal of illusion one is unable to realize that IkOankar is always dwelling everywhere and in everyone.2.1.
1 creative and all-pervasive Supreme Being; through the grace of the true Guru. (Rag) Dhanasari, Ninth Embodiment.

What for, O (brother)! Do (you) go to the forests to search?
The One who dwells in all, ever detached (Hari), is merged with you.1. rahau.

Just as the smell resides in the flower, as a reflection in the mirror;
Similarly, Hari dwells constantly; search only inside the heart, O brother!1.

Without, within, know only the One; the wisdom of the Guru tells this. Servant Nanak (signature): Without recognizing the self, the scum of illusion is not removed.2.1.
This Sabad employs natural linguistic expression. Through accessible language, it has been stated: Why do you go to the forests to search for IkOankar? The all-pervasive IkOankar is dwelling in the being just as the fragrance in the flower and the reflection in the mirror.

In the second line, the compound words such as ‘sarab nivāsī’ (the One who dwells in all), and ‘sadā alepā’ (ever detached), are describing the qualities of IkOankar. Therefore, eulogy has appeared here. Additionally, the words in these compound word sets convey meanings opposite of each other. Therefore, antagonistic syntactic parallelism is also present here. Through this, it has been affirmed that IkOankar dwells in all as well as ever detached from all.

In the third and fourth line, a simile is used beautifully. Here, smell (bāsu) in the flower (puhap) and reflection (chāī) in the mirror (mukar) are the objects of comparison, Remover of suffering (hari - IkOankar) in the heart (ghaṭ) is the subject of comparison. Through the words ‘jiu’ (as), ‘jaise’ (such as), ‘taise’ (similarly), two situations have been compared here. To describe the dwelling of IkOankar in the ‘ghaṭ’ (heart/body), two illustrations ‘fragrance in the flower,’ and ‘reflection in the mirror’ have been used here. Therefore, exemplification appears here.

In the third line, the phrase ‘basatu hai’ (dwells) connects to both, the previous phrase ‘puhap madhi jiu’ (just as in the flower), and the latter ‘mukar māhi jaise chāī’ (as a reflection in the mirror). Consequently, a figure of speech has also appeared here, which is called ‘dehli dipak’ in Indic poetics.

In the fourth line, the word ‘ghaṭ’ is used symbolically to refer to the body or heart. The word ‘ghat’ literally means ‘pitcher.’ In the Indic philosophical traditions, the human body has been compared with a pitcher.

In the fifth line, antagonistic lexical parallelism is visible because of the presence of the compound words ‘bāhari bhītari’ (without, within) in the phrase ‘bāhari bhītari eko jānahu’ (without, within, know only the One). The stated phrase creates a special creative context by connecting with the compound word ‘sarab nivāsī’ (the One who dwells in all) appearing in the second line, and it also conveying the idea of IkOankar dwelling in the entire creation.

In the sixth line, a metaphor has appeared in ‘bhram kī kāī’ (scum of illusion). Here, ‘bhram’ (illusion) is the subject of comparison, and ‘kāī’ (scum) is the object of comparison; both are considered the same. The literal meaning of ‘kāī’ is the layer of green fungus (scum) that appears on the surface of stagnant dirty water. Here, this word is used very creatively and symbolically, which points to the filth and dirt of ignorance settled on one’s consciousness.