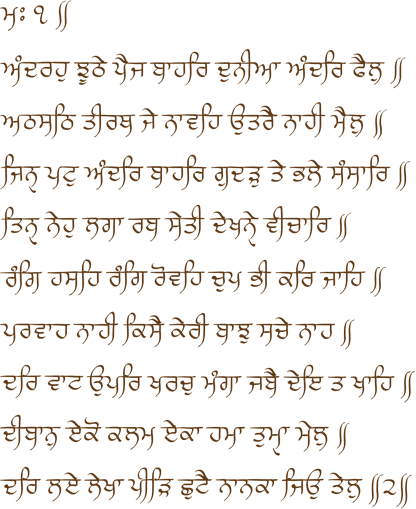 Guru Nanak then explores what these kinds of empty or tasteless and uninspired people are doing in the world. Those who remain engrossed in falsehood mentally, but put on a false show of honor and respect in the world through pretense or influence, can never be cleansed of their internal filth of vices, even if they go about bathing at sixty-eight pilgrimage sites (as prescribed in Hindu thought and practiced globally by many ideologies). These people are liars internally, but they are running around in the world with power and influence due to the performance of inspiration or purity. Despite their best efforts to cleanse themselves, their impurity stays with them, unable to be cleansed by rites or rituals. We see this with holy men and women, wellness gurus and social media influencers, people who tell us they can help us, that they know the secrets to feeling inspired and cleansing oneself, who perform and say all the right words but who do not mean what they say.

Guru Nanak addresses the liars among us: look, all you saintly religious people, everyone will have their own unions in that Court where there is only one Command. The same pen writes the overarching Command, the same Court writes all of those accounts. If you want to go to that Court and cry, “this is mine” and “this is yours” there, if you want to hold fast to your belief in your religiosities and dualities and categories and hierarchies, then your pain will crush you.

Those who remain mentally engrossed in falsehood, but put on a false show of honor in the world through pretense or influence, cannot be cleansed of their internal filth of vices, even if they bathe at sixty-eight pilgrimage sites.
Those who wear tattered clothes but have Nam-Identification (silk) of IkOankar in their hearts, are worthy in the world, compared to those internally false people. They cherish the love of IkOankar and are engrossed in longing for the vision of IkOankar.
They are joyous only in love of IkOankar, they yearn only in love of IkOankar, and in love of IkOankar alone, they are devoted and become silent.
They do not depend on anyone other than IkOankar, the eternal Owner.
They have sought sustenance only at the door of IkOankar. When IkOankar gives, they eat; IkOankar alone is the support of their life.
There is only one Court that delivers justice, one Command (pen) that writes the accounts of human deeds. All beings will gather at that Court.
O Nanak! IkOankar evaluates the deeds of all individuals at the Court. The transgressors suffer just like the sesame seeds are pressed to extract oil.

(Those who are) false within, (but establish an) expanse of honor outside in the world; even if they bathe at sixty-eight pilgrimage sites, (their inner) filth does not get removed.
(Those) with silk within, (even though they wear) rags outwardly, they are worthy in the world.
Their love is attached to (IkOankar, and they) are engrossed in the thought of seeing (IkOankar).
(They) laugh in love, (they) cry in love, (and they sometimes even) go silent (in the love of IkOankar, the Owner).
(They) do not care about anyone other than the true Owner.
(They have) asked (for) sustenance at the door (of IkOankar); when (IkOankar) gives, (they) eat.
(There) is only one Court, (and) one Pen; (there), the union of yours and ours (will take place).
(IkOankar) evaluates accounts at the Court, O Nanak! Just like the oil is extracted by pressing.

Through the usage of simple linguistic expressions the first two lines of this salok makes it clear that people who have malice within, but display false prestige in this world; are pretentious. Even if such people go and bathe at the sixty-eight pilgrimage sites, the filth of their mind does not get cleansed.

The next two lines offer a comparison of such false people with those individuals who have Nam-Identification (silk) within their heart even though they may wear tattered clothes; the latter are the noble ones. This is a symbolic reference. The symbol of silk inside, and ragged clothes outside points to the tendency of staying humble and not being pretentious of one’s qualities or status to the world. This is a quality of those individuals who are always engrossed in love of IkOankar and long for a connection/union with IkOankar.

Even though the fifth, sixth, and seventh lines employ simple linguistic expressions, they are also symbolic in nature. They state that the lovers of IkOankar laugh or cry only in IkOankar’s love. They accept both happiness and pain equally in life. They do not depend on anyone except IkOankar. They are content with whatever they receive by the will of IkOankar.

The eighth and ninth lines employed with clarity of words. They state that IkOankar’s court is one, as well as the pen is one. When the deeds of individuals, who are engrossed in falsehood, are scrutinized in the court of IkOankar, they are squeezed just like the sesame seeds are pressed to extract oil from them. But the words ‘dībānu’ (court), ‘kalam’ (pen), and ‘dari’ (at the court) are symbolic, which point to the court, command and the doorstep of IkOankar respectively. Simile has been used in ‘pīṛi chuṭai nānakā jiu telu.’

There are nine lines in this salok. Barring a small difference, the meter convention of all the lines is 16+11= 27. Consequently, this salok can be categorized under a four line verse with 16+11 characters each (sarsī chand).