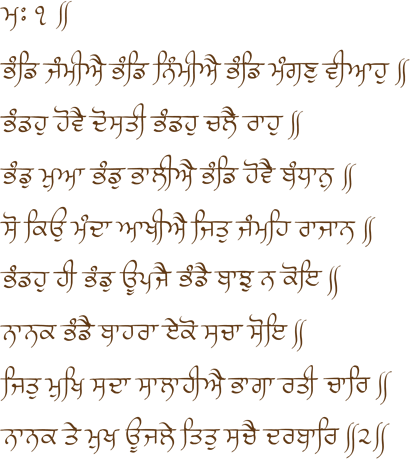 Guru Nanak focuses verse two on another example of how these divisions of pure versus impure dictate everyday life, by discussing the female subject. This builds on the discussion in the previous ballad of the hypocritical belief in the impurity of a menstruating woman, that the very men calling her impure are impure in their actions and in their speech. This is a larger statement about the inherent importance of women as the nuclei of society around which all things are centered.

Guru Nanak says, we are made of a woman's blood and come into being through her, to a woman we are betrothed and married. Through a woman, friendship is extended in the form of relationships, and through a woman, the system of the world is furthered. Guru Nanak describes the woman as the bhand, a thing you put other things in, which holds so many other things, a vessel for all of these other things which flow from her. The famous line that is so often quoted usually reads, Why call her bad? From her, kings are born,” but this line is merely the last example in a list of examples employed to make the larger point that the woman is the nucleus of society — not just in the private sphere, but also in the public political sphere too. This is a statement about every role in society getting its start from the woman, every code of society, every social system, every relationship, and every system of governance, because the great rulers (highest political potentialities) of our time come from her. This is a larger statement that all potentialities are rooted in the woman. All potentialities come from her. Nothing happens without her.

Guru Nanak says that the only exception to this is the One Eternal and that the mouth which praises the One and condemns women is not really a mouth that is praising the One at all. That dichotomy of putting down women and praising men will continue until our mouths are forever living in the praise, our minds are focused on the praise, and Nam (1-Identification) is brought into our connection with IkOankar. This is when hypocritical condemnation of anyone leaves our mouths forever. Truly praising IkOankar means having no more differentiations in our worldview. This is a direct statement on both the South Asian religious context and on the Semitic context — in brahminical codes, the woman is considered to be below the lowest caste, and in Semitic traditions, she is described as the weaker vessel (so here, the use of bhand, describing a woman as a vessel, seems to be a reference to biblical framing). The mouth with which IkOankar is always praised is fortunate. Nanak! Only such individuals who praise IkOankar are honored in the eternal court of IkOankar.

One is made from a woman’s blood and comes into being through her. To a woman one is betrothed and married. Through a woman, friendship is established, and through a woman, the process of the world is furthered.
When the first woman dies, another is sought. Only through a woman the discipline of a householder’s life is established. Why call her bad, the one who gives birth (even) to royalty.
Through a woman alone another woman is born. There is no one in this world who is not born to a woman. Nanak! Only that eternal Creator exists without a woman.
The mouth with which IkOankar is always praised is fortunate. Nanak! Only such individuals who praise IkOankar are honored in the eternal court of IkOankar.

From a woman (one) takes birth, from a woman (one is) formed. With a woman is betrothal and marriage.
From a woman occurs friendship (with others), (and then) from a woman is carried on the process (of the world).
(When the first) woman dies, (a second) woman is sought; only with a woman is the foundation of a disciplined household life laid. (Then) why call her bad, from whom (even) kings are born.
From a woman alone woman is born; without a woman no one (is born in this world). Nanak! (Only) that true One is (existing) without a woman.
The mouth with which (IkOankar) is always praised, (that face is adorned with) four grains of fortunes.
Nanak! (Only) those (who praise IkOankar) are of radiant faces in that true Court.

The appearance of the word ‘bhanḍ’ (woman) twelve times, in different grammatical forms, is creating lexical parallelism. Through this poetic formula, the overarching significance of women has been established: Through a woman we take birth, in a woman’s womb we take shape. With a woman we are betrothed and married. With a woman we make friendship, and through a woman the system of the world is furthered. If a woman dies, another one is sought. Through a woman, a man’s household established. Why call the woman bad, who has given birth to kings? From a woman, a woman is born. No one can be born into this world without a woman. Only the one eternal IkOankar is beyond the woman. The mouth that praises IkOankar, is fortunate and it is honored in IkOankar’s court.

This salok contains a total of eight lines. With the exception of the first and the third line, the meter convention of all the lines is 13+11 based on either articulation/pronunciation or vocabulary. There are 16 and 15 meters in the first half of the first and third lines respectively. But during rhythmic articulation with the beat, they seem similar to the rest of the line (13+13). So this salok can also be categorized under a two line verse/couplet with 13+11 characters each (doharā chand), which has been made by clubbing four doharās.