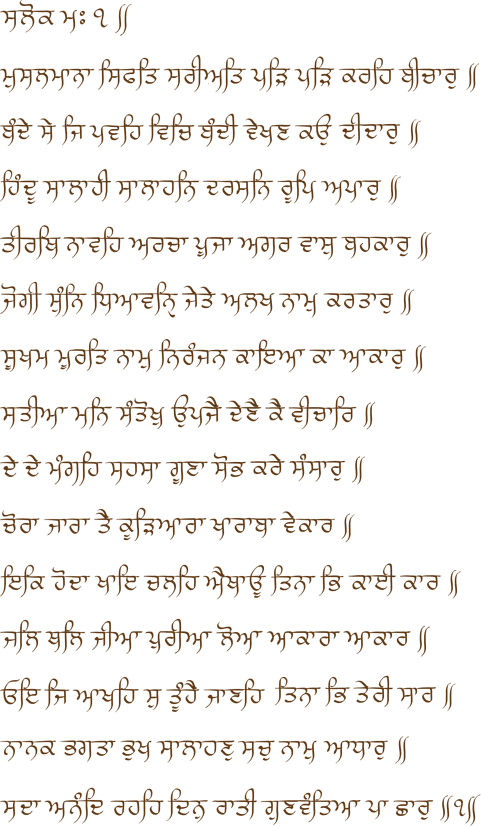 Guru Nanak begins this ballad by giving us some observations on Muslims, Hindus, and other major religions and schools of thought of the time. Whereas in previous ballads, we saw a glimpse of the theatricalities, in this ballad, the listings explore the degeneration of these religions and schools of thought by looking at what people are busy doing. This is an exploration of the dominant cultural and religious paradigms of the time, and a statement on the similarities between what might at first be classified as diametrically opposed schools of thought. The reality is that their degeneration is rooted in the same things, even if it manifests in different ways. Guru Nanak is observing what particular religiosities have been reduced to, looking at the busyness and messiness of people and the ways their behaviors do not align with the religions or schools of thought they claim to be a part of. Whereas in the previous verse, theatricalities were the main distraction being described, here, there are three categories listed. A hyper-focus on laws and restrictions through ritual is just as distracting as a hyper-focus on cleansing and purification, which is just as distracting as an endless intellectual or philosophical quest for meaning and understanding.

These listings are not limited just to the traditions mentioned in this verse. We are all involved in these things. We see hybridizations of these categories, whether it is within the context of a specific religious community or in the context of the global spirituality industry. Within communities, we focus on checklists to measure ourselves and (more often than not) others against. Laws, restrictions, and rules are easy to get distracted by because they are easy and tangible things to orient ourselves around without doing any of the hard and necessary work of changing our behaviors. The same is true of cleansing rituals and pilgrimages, going to “sacred” spaces and hoping that the ritual purification will give us some sort of connection to the 1Force (One Universal Integrative Force, the One, 1-Ness).

As for the last category, we are all busy looking for meaning all of the time, on this endless quest to have access to what we think are the secrets of existence, to pull meaning out of things and explain what cannot be explained. In the context of the industry of spirituality, that means being preyed on, convinced into thinking that if we spend the right amount of money to have “meaning” spoon-fed to us, it will give us the answers we are looking for. But that same false sense of connection is transient — it plays with our immediate emotions and ultimately frustrates us.

And, Guru Nanak says in drawing the connection between the categories we broadly define as “law-oriented” and “spirituality-oriented,” those who say they are more spiritually-inclined because they do not concern themselves with the law are really no different than those who do. They are partners with the ones who make the laws. The spiritual and the political are intertwined. In the US context, that manifests as Christian leaders having relationships with political leaders and influencing policy. In the South Asian context, that manifests as Sadhus and Babas and other holy men acting as political partners with certain parties, helping them gain the votes they need by preying on their followers. The spiritual and the political are intertwined.

Guru Nanak then compares what people are busy doing to what those who are lovers of the 1Force are doing — what their behaviors are. The lovers of the One are not looking for mentoring in trying to figure out what the right laws or the right rituals are, or exploring questions that cannot be ultimately understood through logic, like what is nothingness. Instead, they are busy glorifying 1-Identification, or Nam — the ways in which we identify with, connect to, and experience the One. This is their life support. Those lovers of the One are the ones who praise the One, the ones who are in bliss and joy, day and night, who consider themselves to be the dust of people of virtues. These devotees can be from any walk of life, from any practicing or non-practicing traditions. The point is that their excitement is always there, they are always so excited to be praising the One, and they are humble in the way they live, looking for mentoring in the three qualities: Identification with the One, praise of the One, and the practicing of good virtues.
The praise of the Islamic Sharia, the religious code of conduct, is appealing to the Muslims; having studied it repeatedly they reflect on it. According to them, they alone are true servants of Allah, who follow the restriction of Sharia in order to have a glimpse of IkOankar.
The Hindus, in accordance with their religious texts, praise the Praiseworthy, who is boundless in philosophy and form. They bathe at the pilgrimage site, worship the idol of their deity and spread the scent and fragrance of joss-wood incense.
As many Yogis as there are, in accordance with the Yogic tradition, they all meditate on the Creator, whose Nam (Identification) is unperceivable, in a thoughtless state of void. They try to visualize the subtle and immaculate formless One, whose Nam (Identification) is beyond the influence of Maya (Nirañjan), in the form of a body.
Satisfaction arises in the minds of charity-givers only at the thought of doing charity.
After giving, they ask IkOankar for a thousand times more than what they donated; and the world praises them.
Thieves, adulterers, liars, incorrigibles, wrong doers, and many others like them consume whatever they have earned here in this life, and depart empty-handed, having gained nothing spiritually. Are their actions of any use?
O IkOankar! There are different shapes and forms of the creatures living in water, on land, and in the regions and realms of the universe. Whatever they speak, only You know; they are also in Your care.
Nanak signature: O IkOankar! When Your devotees crave the eternal Identification (Nam), they sing Your praise. Your eternal Identification (Nam) alone is their life-support.
By virtue of singing Your praises day and night, they always remain in bliss and live in humility, as they consider themselves to be the dust of the feet of those who praise and practice IkOankar’s attributes.

To the Muslims, praise of Sharia is (appealing); having read repeatedly, (they) reflect (on it).
Servants are they alone, who remain in its restriction, to see a Vision.
Hindus praise the Praiseworthy, (who) is boundless on account of visibility and form.
At pilgrimage site, (they) bathe, worship, spread the scent and fragrance of joss-wood.
(As many) Yogis (as there are, they) meditate, in a state of void, on the Creator of unperceivable Nam.
(They imagine) the subtle Being, whose Nam is Nirañjan, in the form of a body.
With the thought of giving, satisfaction arises in the charity-givers’ minds.
Having given, they ask for thousand times (more); the world praises (them).
Thieves, adulterers, liars, wickeds and the vice-filled; many (like them), having consumed here (itself, all that they) have (gathered), depart; is their action of any worth?
(O IkOankar!) In the water, on the land, in the regions and realms, (whatever) shapes and forms of creatures.
Whatever they speak, only You know; they are also in Your care.
Nanak (signature): For the devotees (Your) praise itself is the hunger; the eternal Nam is (their) support.
(They) always remain in bliss, day and night, (being) dust of the feet of the virtuous.

Through the repeated use of the same letters, vowels and consonants, a unique rhythm and aural beauty has evolved in this salok. Technically, this is called phonological parallelism. This style is seen in almost every line of this salok.

There is a presence of alliteration here because of the repeated use of certain letters or groups of letters. In this salok, Islam in the first-second line, Hindu tradition in the third-fourth line, Yogism in the fifth-sixth line, philanthropists in the seventh-eighth line, perverse individuals in the ninth-tenth line, creatures of the universe in the eleventh-twelfth line, etc. have been discussed sequentially. But in the last two lines, Guru Granth Sahib’s principle has been focused upon. Because of ascertaining Guru Granth Sahib’s principle in the end, after contextualizing the outlook of other traditions, there is discourse deflection in these lines.