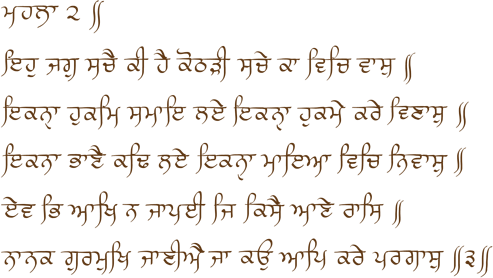 Guru Angad elaborates and comments on Guru Nanak’s two verses, bringing it from the more theoretical into the practical day-to-day lives of human beings. Guru Angad refers to the world as a small house, that in the vastness we were introduced to before, even the entire earth is just a small blue dot. But, Guru Angad says, even in this small blue dot, on this tiny rock moving in circles in the infinite, even in our little house of a world, truth, or eternality, lives.

Despite feeling small in our individual lives when we bear witness to the vastness around us, we also tend to believe that the 1Force resides only in the world we know, here on Earth. Guru Angad challenges this idea and presents a worldview borne out of the 1Force paradigm. Truth lives here in its capacity as the One that lives in all places. Our minds are limited in viewing and understanding the completeness of the Eternal, and so day to day we easily slip into thinking that the One is somehow tethered to the earth and to human beings and the world they experience. Guru Angad reminds us that the infinite Eternal is pervading the vastness.

And from our limited views, we might think we understand the rules and systems that govern the things around us, but we cannot understand all of the things — rules and systems, characters and behaviors — that govern the universe. Guru Angad explains that some beings are within the Command, and some are destroyed, some are taken out of duality, some are left to sit in it. But even with this explanation, we cannot know or understand the full picture until the Wisdom enters our consciousness. Until then, we are just playing the game of life, dealing with immediacy, unable to look past the things that are right in front of us. By becoming Wisdom-oriented, the full picture comes into focus, and we find that even from this small place, even from all indications of our smallness, we are a part of something much larger. We are part of the Eternal.

Due to the employment of metaphor in the first line of this salok, ‘jagu’ (world) has been evoked as the compared subject, and ‘koṭhaṛī’ (house) as the object of comparison. The thought conveyed is that this world is an abode of IkOankar. IkOankar is omnipresent even in the most minute elements of creation.

In the second and the third line, in ‘samāi lae’ (merges) and ‘viṇāsu’ (destruction), and ‘kaḍhi lae’ (rescues) and ‘nivāsu’ (dwelling), through antagonistic semantic parallelism, it has been indicated that IkOankar, by Own accord, merges beings with the Self, destroys them, takes them out of materialism, and traps them in materialism.

In these lines, word ‘iknā’ (to some) has been used four times, which is the sign of lexical parallelism. The second Sovereign explains that IkOankar, in accordance with IkOankar’s Command, liberates many beings, while entangling many others in the cycle of worldly materialism. Here, the words ‘hukami,’ ‘hukame,’ and ‘bhāṇai’ have been used to indicate the same meaning, that is ‘under the command.’ Therefore, isomorphic semantic parallelism is present here. This way, it has been made clear that IkOankar’s will and command are omnipotent and all-pervasive.

In the last two lines, ‘kisai āṇe rāsi’ (brings onto the right path) and ‘āpi kare pargāsu’ (Oneself may bestow light) phrases have been used as allusions. These phrases indicate that to whom and when, the grace is to be bestowed, is something known only to IkOankar. The word ‘gurmukhi’ (through the Guru’s mouth) formed by using ‘guru’ (guru) and ‘mukhi’ (through the mouth) is extremely creative as well. The Guru’s teaching can only be obtained from the Guru’s mouth, which is why this word holds deeper meaning. While stressing the importance of the Guru, it has been conveyed that awareness of IkOankar’s Order can only be obtained through the Guru.