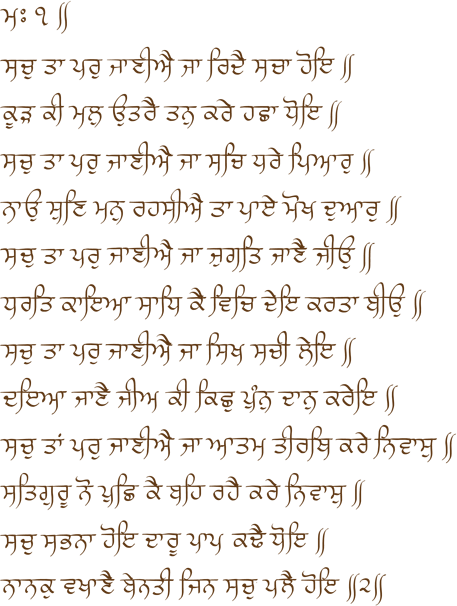 Guru Nanak then answers the question of what we do now that we have understood this temporariness. Here we see the first process-oriented answer from Guru Nanak, laid out in five steps. The eternal can only be acknowledged or recognized through this procedure, and the question posed many times throughout this verse is whether or not we really want to know these answers. The weight of the decision to pursue this is not to be taken lightly.

Guru Nanak says, if we really want to know this, we must first start with the heart. If we keep our hearts clean, if our hearts identify with the Eternal, then we are ready to get rid of the dirt and filth from the mind and the self within the body. Our existence is all about our behaviors — how we act in the world. If we begin with the acknowledgment that our hearts are in the right place, we can move from that to the next step, and eventually work on our behavior.

If we acknowledge the first part and we are still ready to go to the next level, Guru Nanak tells us to place love in our hearts. What does that mean? It means that when we identify with the Eternal, our minds feel excited, and it opens up doors of freedom for us. It is then that our minds look for freedom, and we are ready for the third step. These first two steps break us, the way a coach might break us in training us for a big game. Guru Nanak is breaking us, out of love, and coaching us through the various levels while being very clear about the hard work that must go into each step.

The third step is about method. Guru Nanak tells us that the Eternal can only be realized when we learn how to live truthfully, and learn how to discipline ourselves in preparation for that realization. We must do the hard work of preparing the soil of the body, before we can sow the seeds of identifying with the Eternal.

Once we are ready with that discipline, we reach step four, which is where the instruction comes: become compassionate — have compassion for and see the compassion in every being. Learn to do virtuous acts and perform charity. Most of us tend to jump to step four before we have done the hard internal work of changing ourselves and preparing our bodies for this behavior. Most of us are not ready to do these acts of service or charity from a place of love, because we have not prepared ourselves.

Once we have changed our behaviors and ourselves, step five comes: we must take the pilgrimage within. The way we understand this abstract statement is that we come to a place where our inquiries are satisfied, our mind does not wander or waver, and the only place we go to ask questions is within, where we ask only the eternal Wisdom (the true Guru, the one who brings enlightenment-light by dispelling ignorance-darkness) and no one else for answers and guidance.

This is how the Truth, or the Eternal, becomes our medicine and cures us of any non-virtuous things. Guru Nanak ends this verse by acknowledging and asking to be in the company of those who have the Truth, who have achieved this fifth step successfully.

In this salok, the first Sovereign has explained how the eternal One, the embodiment of Truth can be realized? This question is implicitly present in the entire salok. Five different answers have been offered to this question in five different statements to the question of ‘sacu tā paru jāṇīai’ (truth can only be realized). These have been beautifully answered through an impressive employment of parallelism in this salok.

Each statement has two lines. First line of every statement starts with ‘sacu tā paru jāṇīai’ (truth can only be realized). Answers to this interrogative statement have been given in the next half of the statement’s first line. In the second line, it has been elaborated further.

Thus, five different answers are offered in five different statements for the interrogative statement ‘sacu tā paru jāṇīai’ (truth can only be realized). Then those answers are explained in the next line of each statement. In the first ten lines, that is, the first five statements, the same scheme has been followed. This discourse level structural parallelism introduces special meaning and aural aesthetics to this salok.

Symbolic statements have been used systematically in this salok. For example, in the line ‘kūṛu kī malu utarai tanu kare hachā dhoi’ (filth of lies is removed and the body is cleansed by washing), it has been explained that the influence of falsehood is removed by enshrining truth in the heart, by employing symbolism of washing the body and removing the dirt of falsehood. Similar pointers can be traced in other statements also.

Simple linguistic expression has been utilized in the fourth statement, that is, the seventh-eighth line. It has been clearly explained that truth can only be realized, if the true teaching is received (from the Guru), and a truthful lifestyle is practiced while compassionately serving and helping people.