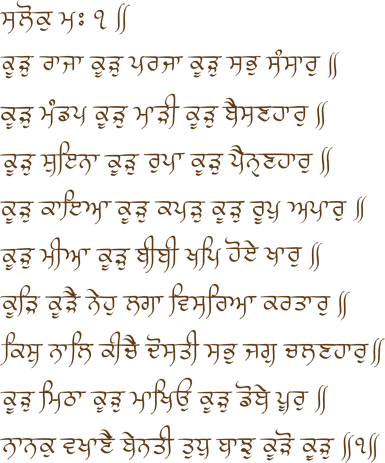 Guru Nanak focuses this first verse on those things which are false, or temporary, listing out various possessions and relationships. The King and his subjects, our relationships, all of our shelters (houses, big and small), all of us humans, our gold and silver, our jewels, our bodies, our clothing, our beauty, the world — they are all temporary. And we are attached to these things all around us, to this short-lived, temporary world, we grasp at things that will leave us and in that grasping, 1Force (One Universal Integrative Force), the Creator of all of these temporary things is forgotten. The temporary things befriend the temporary (all of us in our relationships to other people and in our relationships to things, are doing this every day), and to us, these pairings are sweet like honey. But we do not realize that boatloads and boatloads of us are getting drowned in this indulgence with the material world, in our possessions and our relationships.

Guru Nanak is not making a statement on materialism versus minimalism, or judging the value of what we may call ostentatious possessions. This is not really about what we wear, what we own, how big our houses are, or what relationships we have. It is about exploring the question of whether we feel the presence of the One (1Force) in our possessions and our relationships. This is not about owning or possessing, but it is asking us about the things we own and possess and the relationships we have. To what end are we owning and possessing and forming relationships? Everything is temporary eventually. So to what end are we accumulating these things? What purpose are they serving? How are we engaging with these things? What is our attitude towards them? Do we feel the One’s presence in all of these things that we enjoy? It is not that these things themselves are negative or temporary or trash, but it is that without the presence of the One, they are temporary. With the presence of the One, even the temporary things we experience become less temporary.

In this salok of nine lines, lexical parallelism has been beautifully used. Under this literary scheme, the word ‘kūṛu’ (false) has been used seventeen times in all. It has been used three times each in the first, second, third, fourth, and eighth line, and two times in the fifth line. Additionally, the structure of these six lines is also similar; accordingly, we have structural parallelism here. The employment of these literary tools (parallelism), and the repetition of word ‘kūṛu’, emphasis has been laid upon the fact that every material thing and the creatures of this universe are ephemeral, short-lived and perishable.

Words like ‘rājā-parjā’ (king-citizenry) in the first line, ‘manḍap-māṛī’ (tented pavilions-attic) in the second line, ‘suinā-rupā’ (gold-silver) in the third line, ‘kāiā-kapaṛu’ (body-dress) in the fourth line, ‘mīā-bībī’ (husband-wife) in the fifth line and ‘miṭhā-mākhiu’ (sweet-honey) in the eighth line complement each other in meaning; therefore, there is an isomorphic semantic parallelism. The (last) word used at the end of these lines is related to the previous two words used in the respective lines, and thus, highlights their meaning.

The last line of this salok ‘tudhu bājhu kūṛo kūṛu’ (without You, all is false and only false) is conveying the central message of the entire salok, which is that everything other than IkOankar is temporary and perishable. Just as this line unravels the puzzle contained in the earlier lines, it also encounters/witnesses the possibilities that are beyond the transient nature of material things and beings of this world. Phrase ‘tudhu bājhu’ (without You) in this line points to this direction/idea, because except for IkOankar the entire play is perishable.