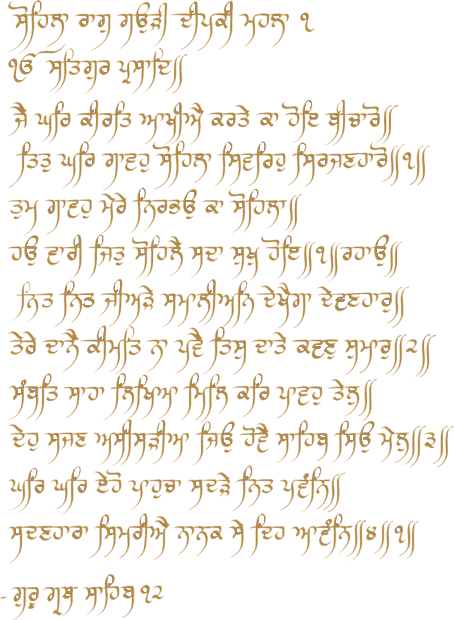 'Sohila,' in the Panjabi cultural context, is a form of a wedding song, sung at the groom’s house in his praise. The wishes, desires, and dreams of the sister, sister-in-law, and mother are expressed in the songs of Sohila. In some songs of Sohila, praises of the maternal home, praises of the father, the glory of the mother, admiration of the groom, and the wishes related to the arriving daughter-in-law are sung.

The first stanza of Sohila, of the Song of Joy, is one of happiness, praise, and excitement, set in a marriage context. It is written in Rag Gauri Dipki — a unique musical mode of nuptial bliss.

It is that song of joy that Guru Nanak devotes to. It is that song of joy that the Guru is willing to do anything and everything for because it brings with it eternal joy and happiness and comfort. Guru Nanak says, in that school of thought, in that home-heart, in that body where there is praise of the One, let us sing the Song of Joy and remember the Creator, IkOankar (One Universal Integrative Force, 1Force). This is singing that happens both externally and internally. It is happening in physical spaces, in the physical company of truth-oriented ones, and it is happening in the hearts of those who are reflecting and singing of IkOankar’s glory.

Singing is not a thing we can think through and then do — it is a spontaneous burst, something we feel the urge to do on an emotional level. It is rooted in feeling and not in thinking. We may sing after we have thought about many things, maybe after we have prepared in some way, but the urge to sing, the impetus that drives one to a song, is deeply emotional. It pours out of us.

Many interpretations of Sohila see it only as a reference to a union that happens in death. In other Indic and Abrahamic cosmologies, the union is only possible upon death. But this union in the Sikh context is possible in life, too. In fact, we are urged to prepare and experience union while we are still alive. This marriage, this union with the One, is what leads us to sing. It is the joy of that preparation and the anticipation of that union that causes people to gather around us, encourage us, sing with us, prepare to see us off by pouring the oil. In South Asia, oil is generally poured at the door when the bride is brought home to the in-law’s house. This oil symbolizes Identification with IkOankar (Nam). If we do not have the oil of Identification with IkOankar to light our inner lamps, we do not have the right oil. What are we pouring within? What are we asking people to pour for us on the day we go to meet our Sovereign?

The year and time of this moment of the pouring of oil and the union are set. Guru Nanak uses the symbolism of the wedding day, that set moment of union. People come and encourage the one who will be married, celebrate them and their union, and bless them on their day. Here, the bride, the seeker, asks their friends to come and ignite the love of the One within, to encourage union. The seeker asks their friends to encourage them to experience union while they are living, not when they physically depart the earthly realm.

The wedding or union and death are synonymous, but not in the way we might think, given the common religious conceptions of union being possible only upon death. Most of us do not know how to marry death, not while we are living, because we fear death the most. But if we have married death in our lifetimes, we will begin to sing the song of the Fearless. We are being encouraged to marry death while we are alive.

The last lines tell us that invitations for weddings are going to every house — death is happening every day. Guru Nanak says if we are reminded every day of this eventuality, if we remember the One who calls us to union, we will act differently. We know these things to be true, but we see them as distant realities. Why do we not spend our time remembering the Caller? Why do we not marry death while we are alive?
In Rag Gauri Dipki, Sabad revealed by Guru Nanak Sahib under the title ‘Sohila.’
The creative and all-pervasive Force (IkOankar) is one, that is, unparalleled. IkOankar can only be realized through the grace of Wisdom (Guru).

O being the company of the saintly or virtuous beings (sangat-like house) in which the Creator, IkOankar, is praised and contemplated upon, in that company, sing the joyful song of praise and remember the Creator.1.

Every day, the Giver takes care of the beings. That Giver will surely take care of you too.
You cannot even estimate the value of the Giver’s gift; how can you estimate the greatness of the Giver?.2.

O friends! Everyone’s time of departure to the abode of the Divine-Husband, IkOankar (in-law’s house), has been fixed from the Origin; everyone gather, ignite love within me, and encourage me to unite with IkOankar.
Give me blessings so that I may unite with IkOankar.3.

This wedding invitation of going to IkOankar’s home is reaching each and every house. Beings are getting invitations every day.
At the end of the Sabad, by using the signature ‘Nanak,’ Guru Nanak states that if we remember the Caller, IkOankar, then those auspicious days of union will surely come.4.1.

Rag Gauri Dipki, First Embodiment; Sohila.
1 creative and all-pervasive Supreme Being; through the grace of the true Guru.

Every day, the beings are taken care of (by the Creator); (that) Giver will take care (of you too).
By you, (even) the value of (the Giver’s) gift cannot be estimated; what estimation of that Giver (can be made)?.2.

(Every beings’) year (and) auspicious moment of wedding (going to the in-law’s house) is written; (everyone), having gathered, pour the oil (of auspiciousness on me).
O friends! Give blessings, by which union with the Master may happen.3.

In each and every home, this wedding invitation alone is (arriving); every day, invitations are being delivered.
Nanak (signature): (If we) remember the Caller, those days (of union surely) come.4.1.
In the context of the devotion to IkOankar, the first two lines of this Sabad have four verbs, 'ākhīai’ (is said), ‘bīcāro’ (contemplate), ‘gāvahu’ (sing) and ‘sivrihu’ (remember), which are used in a beautiful and meaningful way. In this one stanza alone, four forms of devotion to IkOankar, namely ‘jāp’ (recitation), ‘cintan’ (contemplation), ‘kīrtan’ (singing of hymns), and ‘simran’ (remembrance) are described. The being has been urged to glorify IkOankar, reflect on IkOankar’s greatness, sing the praises of IkOankar and immerse in the Identification (Nam) of IkOankar.

This Sabad makes effective use of symbolism. A metaphor of the Sohila (auspicious songs of a wedding) that are sung in the wedding home and wedding preparations is depicted. The human-bride’s wedding has been fixed with the IkOankar-Husband. In the house, the Songs of praises of IkOankar, the Creator, the Fearless, the Giver of endless gifts, are being sung in the form of ‘Sohila.’ The day of the union is ordained from the Origin. The human-bride is saying, O friends! Get together and pour the oil of auspiciousness and give me blessings so that I may unite with IkOankar. In each and every home, this wedding invitation for the in-laws’ house (where the groom, IkOankar, lives) is being delivered every day. People are being invited every day. If the Caller (IkOankar) is always kept in the consciousness, only then can one unite with IkOankar.