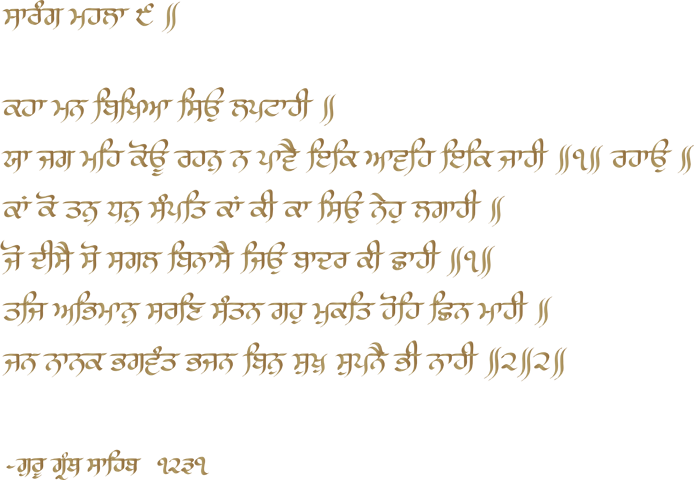 In the second composition, Guru Teghbahadar addresses the mind and says, Mind! Why are you wrapped in poison? No one receives a permanent stay in this world. Many come, many depart. There is a question of what we are really after in this life, what we are wrapping ourselves around, what are our minds centered on? The answer is the poison of anything that makes us forget the Eternal, IkOankar (One Universal Integrative Force, 1Force, the One). The system of coming and going continues — some are born, and some are dying, no one stays forever. We know this! Knowing this, knowing that none of what we have wrapped ourselves around will come with us when we go, why are we still bound?


Mind! Why are you wrapped in poison? The Guru continues, asking the mind to reflect: whose body is this? Whose wealth? Whose assets? What are you in love with? Again, we draw our attention to the musical mode of Sarang, through which simple messages are conveyed rather than deeply philosophical arguments. These are simple questions the Guru is asking us to reflect on. Notably, the question is not what we are attached to. It is not; what are we bound up in? Instead, it is, what are we in love with? This is not a simple attachment; this is not an accident of the human condition. We often like to think that we are not that far gone, that just like any other human being, naturally, we are caught up in attachment to the material world. But here, the Guru is asking us to be more honest about the agency we have in becoming attached and our choices to get ourselves here. This attachment does not passively happen to us. This is the attachment that we seek and that we enjoy. We savor it so much that we are in love with it. We have seen other compositions where the Guru shows us how to admit our flaws and ailments and seek help. In this composition, we have not even begun to try to fight it. We are still in the enjoyment phase, still deeply steeped in the dream of attachment. The awakening has not happened yet.

Mind! Why are you wrapped in poison? The Guru then provides clear guidance. We really ought to get rid of our ego and pride and give it up, which is hard to do because we are still enjoying it. Once we rid ourselves of these ailments, we can seek refuge in the truth-exemplars — the ones who live the truth. This is how we will unwrap ourselves, release ourselves from what binds us, rid ourselves of the poison that causes us to doubt and forget IkOankar, and become free.

Without the praise of the Fortunate One, without singing about the Fortunate One, even in your dreams, you will not find comfort. Without devotion to the Adorable One, the One who ought to be adored, comfort cannot come to us even in our dreams. Can we wake up from our honeymoon phase with attachment? Can we reflect on our relationship with the world around us and understand where to put our love?

O mind! Why are you engrossed in the poison-like material objects?
No one can stay permanently in this world; know this as the truth. Many are being born, and many are dying.1. Pause.

Who does this body and wealth belong to? Who does all this property belong to? No one; then what are you attached with?
Everything visible will perish one day, just like the shadow of a cloud that does not remain forever.1.

Therefore, renounce pride and seek the company of virtuous beings who are connected with IkOankar. This will free you from material bondage and vices instantly.
At the end of the Sabad, by using the signature ‘devotee Nanak,’ Guru Teghbahadar states: Without the remembrance of IkOankar, eternal happiness is not found even in dreams, let alone in real life.2.2.

Mind! Why are (you) wrapped in poison?
No one receives (permanent) stay in this world; many come, many depart.1. rahau.

Whose is the body (and) wealth, whose is the property, with what are (you) attaching love?
Whatever is visible, all that perishes, just as the shadow of a cloud.1.

Having given up pride, take the sanctuary of saintly beings; (you) will be liberated in an instant.
Servant Nanak (signature): Without the praise(s) of Bhagvant, comfort is not even in the dream.2.2.

This Sabad employs natural linguistic expression. Through accessible language, it has been stated: O mind! Why are you clinging to poison? No one can live in this world permanently. Many come, and many depart. This body, wealth, and property you have attached love with, are no ones. What is visible, will disappear like the shadow of a cloud. Renounce pride, take refuge of the saintly beings; you will be liberated in an instant. Without the praises of IkOankar, comfort is not even in the dreams.

This Sabad is revealed by Guru Teghbahadar Sahib while addressing his own mind in a first-person style. Usually, this is the method used in the Guru Granth Sahib to instruct the human mind.

In the second line, the phrase ‘iki āvahi iki jāhī’ (many come, many depart) is a popular proverbial statement. Therefore, a proverb has appeared here.

In the fifth line, the phrase ‘chin māhī’ (in an instant) is used very creatively. The literal meaning of ‘chin māhī’ is ‘in an instant.’ But here, it is used for an extremely short time.

In the sixth line, the phrase ‘bhagvant bhajan binu sukhu supnai bhī nāhī’ (without the praises of IkOankar, comfort is not even in the dream) is used symbolically, which implies that without the remembrance of IkOankar, happiness is not found even in dreams, let alone real life.