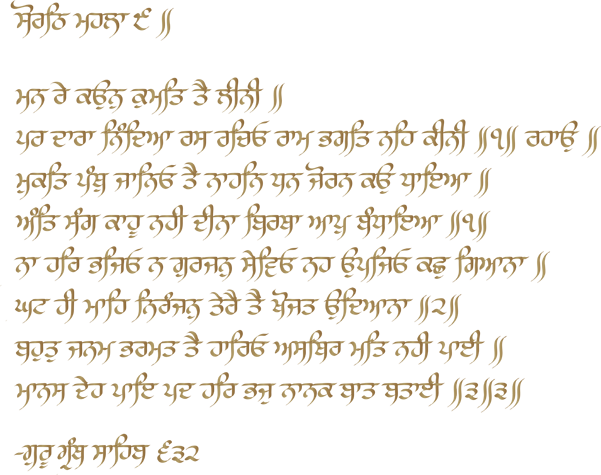 In the third composition, Guru Teghbahadar says, O mind! Which false thinking have you adopted? You are absorbed in the taste of another’s spouse and slander; you did not practice the devotion of the Beautiful One. There comes a point in our lives when we want to understand the way to freedom. We get tired of wandering around and running after Maya, or attachment to the material and relationships. We want to be free mentally, physically, spiritually, and politically. When we have decided to pursue that kind of freedom, we attempt to figure out how to get there, given what our present conditions might be in life. It requires great effort, so how many of us are actually able to walk on this path towards freedom? We are dealing with so much that it sometimes seems impossible even to take a step. We are so steeped in Maya that we find ourselves enjoying it. Our possessions and our relationships are what catch us — we lie and deceive for them and accumulate for them, and when our last breath leaves, we are told we cannot keep them, and they cannot keep us. Our minds are steeped in false or negative thinking, and we cannot seem to find a way out. We do not live in remembrance of the Beautiful, and we do not serve the Wisdom or the wisdom-oriented.

O mind! Which false thinking have you adopted? The Guru elaborates on the consequences of our conditions. We have not understood the path to freedom and instead have been running around to accumulate more and more and more. We think this accumulation is what will eventually free us — we tell ourselves that if we just make a little more money or get the promotion we are seeking or buy the car we have been wanting, we will feel something like freedom, and we will be able to stop needing to run around for accumulation. This is not freedom. The Guru reminds us of the temporariness of all these things. No one is with anyone in the end; no possessions stay with us, no relationships stay with us — all we have done is uselessly bound ourselves up in our own pursuit of Maya. We did not work to figure out the way to freedom.

O mind! Which false thinking have you adopted? We have not sung the praises of the 1-Light. We have not inculcated the virtues of the One, we have not served the Wisdom either internally or externally, and no deep knowledge has been born within us. Serving the Wisdom encompasses both the act of praise of the One and the chiseling of our inner world and consciousness to reflect those virtues and the external acts of service that we do for others when we are reflecting those virtues in the world. It is within our hearts that the One without blemish resides, and yet, we run around outside looking for the One in the forests. We think we must go somewhere else to feel that connection, to find that connection with the One who is beyond our human flaws. But that One is within us — the question is, how do we feel that presence?

O mind! Which false thinking have you adopted? The Guru continues with a description of our conditions. We have spent many lives wandering or wandering through different lives or phases, even in our present singular lifetimes. We have become exhausted and lost, and still, even after so much wandering, we have not been able to find steadiness or an understanding that is constant, and that remains.

If we can sing the praises of the 1-Light, we can live in an elevated state of existence. This is the constant wisdom that we are being reminded of, and we know where to get it and how. We might think we are past the point of no return, but we are graced simply by being in these bodies, humans in the world. We are human beings and are miserable in our conditions, but we do not have to be. The Guru reminds us that we have received these rare human bodies and the opportunities they allow for. So why aren’t we using them to live in remembrance? Why aren’t we using them to live in devotion?
In Rag Sorath, Sabad revealed by Guru Teghbahadar Sahib.

O mind! Which flawed understanding have you adopted?
You are absorbed in the taste of another’s spouse and slander; you did not remember the all-pervading IkOankar.1. Pause.

O mind! You have not realized the way to liberation; you have been running around only to accumulate wealth.
Those for whom you accumulate wealth will not support you in the end; you have uselessly entangled yourself in their attachment.1.

Neither have you remembered IkOankar, nor have you practiced teachings of the Wisdom (Guru), nor has any deep knowledge arisen within you.
IkOankar, who is beyond the influence of material attachment, resides in your heart; but you are searching outside, in the forests.2.

Wandering through many stages, you have not made this life fruitful; you have not acquired a steady understanding which can free you from your flaws.
Guru Teghbahadar Sahib states: Having received the opportunity of this human life, reflect on the virtues of IkOankar; only through this can you attain steadiness.3.3.

O mind! Which false thinking have you taken?
(You) are absorbed in the taste of another’s woman (and) slander; (you) did not practice devotion of Ram.1. rahau.

You have not known the path to liberation, (you) have been running around to accumulate wealth.
No one has given company (to anyone) in the end, (you) have bound yourself uselessly.1.

Neither have (you) sung the praises of Hari, nor have (you) served the Guru, nor has any wisdom born (in you).
In your heart itself is (the One) without the blemish, (yet) you search in the forests.2.

Wandering in many births, you have lost, (you) have not found steady intellect.
Having received the state (like) the body of a human being, sing the praises of Hari; Nanak has told (this) fact.3.3.

This Sabad employs natural linguistic expression. By addressing the seekers through accessible language, it has been stated: O mind! Which false thinking have you taken? You are absorbed in the taste of another's woman and slander; you did not practice the devotion of IkOankar. You have not even known the path of liberation; you have been running around to accumulate wealth. No one will accompany you in the end; you have uselessly bound yourself to them. Neither have you sung the praises of IkOankar, nor have you served the Guru, nor has any deep knowledge been born in you. In your heart, itself is IkOankar, the One without the blemish of material attachment, but you search IkOankar in the forests. Wandering in many births you have lost; you have not found the steady intellect. You have received the human body, therefore remember IkOankar.

This Sabad is revealed by Guru Teghbahadar Sahib while addressing his mind in a first-person style. Usually, this is the method used in the Guru Granth Sahib to instruct the human mind.

The use of the word ‘kumati’ (false thinking) in the first line is befitting and creative. Apart from being associated with the phrases ‘par dārā nindiā ras racio’ (you are absorbed in the taste of another’s woman and slander), and ‘rām bhagati nahi kīnī’ (did not practice devotion of IkOankar) of the second line, the phrase ‘dhan joran kaü dhāiā’ (you have been running around to accumulate wealth) of the third line, and the phrase ‘birthā āpu bandhāiā’ (having bound yourself) of the fourth line, it is forming a special creative context by connecting with the fifth line ‘nā hari bhajio na gurjanu sevio nah upjio kachu giānā’ (neither have you sung the praises of the all-pervasive One, nor have you served the Guru, nor has any wisdom been born in you) and the seventh line ‘bahutu janam bharmat tai hārio asthir mati nahī pāī’ (wandering in many births, you have lost, have not found steady intellect). Through these various deeds are described that are performed by the being in vain under the influence of false thinking.

The word ‘bandhāiā’ (have bound) in the phrase ‘birthā āpu bandhāiā’ (you have bound yourself uselessly) in the fourth line is used in the context of tying a being with material attachments instead of a rope. This linguistic technique is called semantic deviation.

In the entire Sabad, the words ‘racio’ (is absorbed), ‘jānio’ (have known), ‘bhajio’ (sung praises), ‘sevio’ (served), ‘upjio’ (produced), and ‘hārio’ (have lost) are of similar grammatical structure. These can be placed under structural lexical parallelism.