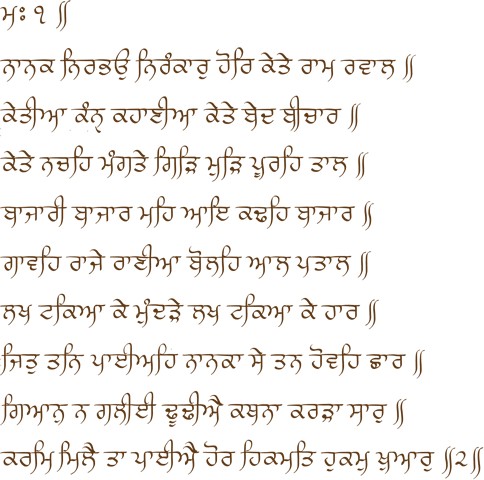 After describing the Command, Guru Nanak moves into describing all of the competing commands that exist everywhere, which serve only to make a mockery of and distract us from the Command that governs all things.

These commands are theatrical — they play into our emotions (everything from fear to anger to sadness to happiness), they feed on our egos, and they give us everything between the skies and the nether regions — the cleverest ways of presenting ideas that might make us laugh and might make us cry, but none of it really adds up to anything other than a transient feeling. We might find them entertaining for their theatricality, but Guru Nanak is asking us to treat them as just that: entertainment.

Guru Nanak warns us about the dangers of expecting this kind of entertainment to bring us the Wisdom (the Guru, the one who brings enlightenment-light by dispelling ignorance-darkness) we seek. There are so many roles and motives on Earth, so many egos and senses of self-importance, it is impossible to know what earthly commands each person is following. Even in these entertaining stories of gods and heroes — whether they are about Ram and Krishna, Zeus and Hercules, Superman and Batman — involve a sense of self-importance, a focus on the Hero arc and fulfilling the individual’s destiny, a centering of individual wants and needs in a moment, and a wide array of commands. These other commands that exist are packaged in an appealing way and for a specific set of people, not for all of humanity. We might enjoy the show, we might find it all interesting — but these things are not Wisdom.

Wisdom cannot be talked about or presented in a clever way in a room for a couple of hours. Eternal Wisdom cannot be summed up and packaged neatly for our consumption, it cannot be intellectual or clever. We can look at modern-day examples: living gurus, swamis, and spiritual leaders who exploit the masses, promise them wisdom, put on a show; organizations that play on emotions and instant gratification for donations and PR campaigns instead of doing the longer and harder work of making a real difference; social media and the way it governs our interactions and our thoughts; anything that plays into our fears and insecurities, our emotions and our egos. The end goal of these things is not to make us feel grace, it is not to eliminate the self, it is not about resolving the Divinity for us. And these things are harmful because unlike the Command, which is for all of creation, these smaller earthly commands that we are inundated with on a daily basis are only for a specific group. They are exploitative and they distract us into thinking we are on some sort of a path to the Wisdom, but instead, we are left empty and frustrated. And, as we have seen in this day and age with certain “spiritual figures” who have amassed large followings (or even certain people who espouse atheist views to large followings), giving these earthly commands and these earthly commanders power is harmful to other people. It turns men into gods, absolves them of any wrongdoing, and emboldens them to exploit and harm those who trust them.

These things that Guru Nanak is talking about, these distractions from the Command, are moving us, only at an emotional level for a particular end. Ultimately, they frustrate and exhaust us. But, Guru Nanak says, the Formless and Eternal One is not doing that, the One is moving with multiple dimensions. We can connect with the Wisdom, and we can internalize it by getting rid of the self and by feeling the Grace. The Grace is that the One who is commanding everything brings the Wisdom into our lives, and it is the Wisdom that gives us the Word (sabad, or Divine teaching) — and that Word is for everyone.

Nanak! Only the formless One is beyond the Command; many god-incarnates (such as Rams) are like dust in front of the formless One.
There are many stories and narratives of god-incarnates (such as Krishan) and many schools of thoughts of philosophies (Vedas).
Many individuals pose as beggars and dance to entertain people for money. They dance to the beat while repeatedly rotating and turning in circles.
Many public performers come to the marketplace, take out their paraphernalia to display their feats and entertain the public.
They sing narratives of the kings and queens, and say nonsensical things (they speak of heaven and hell).
They wear earrings and adorn their bodies with garlands that are worth hundreds of thousands.
But, O Nanak! The bodies, on which these precious earrings and garlands are worn, turn to dust in the end.
The wisdom of the formless One cannot be found merely by talking; trying to explain it merely through words is extremely difficult (hard like iron).
This wisdom can be experienced through the grace of the formless One; everything else, like cleverness, authoritarianism, or egoism (command) is futile (leads to misery).

Nanak! Fearless is (only) the formless (One); many other Rams are (equivalent to) dust.
Many are the stories of Krishan; many are the thoughts of Vedas.
Many beggars dance, (who) repeatedly rotate (and) turn (to) keep time with the musical beat.
(Many) public performers, having come to the markets, set up their shops.
They sing of the kings and the queens; they speak of heaven and hell.
Of hundreds of thousands of coins are the earrings (and) of hundreds of thousands of coins are the garlands.
On whichever body are (these) worn, O Nanak! Those bodies turn to ash (in the end).
Wisdom cannot be found through talks; stating (wisdom) is hard like iron.
If (this wisdom) is received through the grace, (only) then is it obtained; all (other) cleverness and command leads to misery.

Anuprās Alaṅkār has been used in almost all the lines of this salok.

In these lines, there is a repetition of the last letters. This style is called chekānuprās (repetition of similar sounds at the beginning of words).

Similarly, in the first three lines, the word ‘kete’ (many) has been used three times, while in the third, fourth, fifth and seventh lines, the words ‘nacahi’ (they dance), ‘pūrahi’ (they keep time with musical beat), ‘mahi’ (in), ‘kaḍhahi’ (they take out goods), ‘gāvahi’ (they sing), ‘bolahi’ (they speak/say), ‘pāīahi’ (are worn), and ‘hovahi’ (they become) have been used.

Here, the last letters have been constantly repeated. This is called antiānuprās (repetition of rhyming words at the end of sentences). These different usages introduce a special rhythm and flow in this salok, which produces a distinct aural beauty.