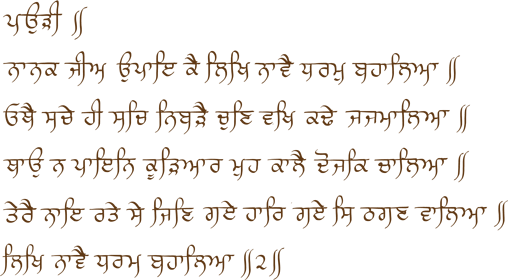 Guru Nanak is setting a scene, using theatrics to get a point across about the dark picture other religions have created to describe the end time or judgment day.

Dharam is a word that can be explained in many ways: role, responsibility, righteousness, religion, duty, or law. We will explain it using the word Principle — believed to be running, taking care of and evaluating the entire phenomenal expanse. In this scene, Guru Nanak takes us to judgment day as described in other faiths, and refers to the King of Righteousness, who judges all of our deeds or principles, ultimately deciding where we go. In the Indic sense, this figure keeps the accounts (heading up the “Account of Principle”) and decides which door will be opened for each of us when we arrive.

Those who are not in tune with the eternal One, who have not acted in the world with an understanding of the 1Force that pervades creation — they are classified as vice-filled lepers (those who are not as “healthy”) and separated out. These people are sent to “hell” or a state of suffering (again, remembering that this is a scene being set and not a literal description), with “blackened faces” (a poetic phrase seen in Indic texts meant to indicate embarrassment or shame).

Guru Nanak is challenging a scoring system that cares less about what you do and more about what or who you accept as a leader or holy person. In the scene being set, there is no mention of who you must follow in order to be “saved,” but instead what you can do in the world to practice principle-centeredness. The “saving” is the freedom we realize when we are able to see that we have no one to answer to other than the Principle. The practice of behavioral transformation through the Wisdom is the Principle that becomes the basis for evaluation of our lives. Those whose behavior exhibits principle-centeredness, feel the 1Force, and see that door opened for them, here and now.

Nanak! Having created human beings, Dharam has been appointed for writing the account.
There, through Truth (and) only Truth (it) is settled; having selected, the lepers are separated.
Liars do not find a place (there), with blackened faces, (they) are made to walk to hell.
(Those who were) imbued in Your Nam, they won; (those who were) deceivers, they lost.
For writing the account, Dharam has been appointed.

In this pauri, the first Sovereign explains that Truth is the basis of approval in the court of IkOankar. There, those with leprosy of vices (jajmāliā) are selected and separated out, those liars (kūṛiār) who engage in falsehood do not find a place, and they go to hell (symbolic of a state of pain and suffering) with blackened faces (shame). Those who remain imbued or colored (rate) in Nam, they win, while the deceivers lose. The three words ‘jajmāliā,’ ‘kūṛiār,’ and ‘ṭhagaṇvāliā’ suggest the same meaning here: ‘those who are bereft of truth and away from righteousness.’ This is isomorphic semantic parallelism.

There is a proverb in ‘muh kālai.’ ‘muh kālā hoṇā is a colloquial expression, which means ‘being dishonored.’ Here, it has been pointed out that ‘kūṛiār’ (the liars) who engage in falsehood, are dishonored and sent to hell to endure the consequences of engaging in falsehood.

There is antagonistic semantic parallelism between ‘jiṇi gae’ (they won) and ‘hāri gae’ (they lost). Through this comparison, it has been conveyed that those walking on the path of truth, those in love of IkOankar’s Nam, win. In contrast, those bereft of truth, those engaged in falsehood, and deceivers all lose and bear the consequences of their actions.

The phrase ‘likhi nāvai dharamu bahāliā’ (dharam has been appointed for writing the account) has been used again at the end of the pauri, which is a syntactic parallelism. Through this repetition, another reminder is offered: that Principle (Dharam) has been seated over the beings to account for their actions, and is judging them based on the standard of truth. Through the figurative expression of ‘Dharam’ and the justice delivered based on human actions, we are encouraged to walk on the path of truth.