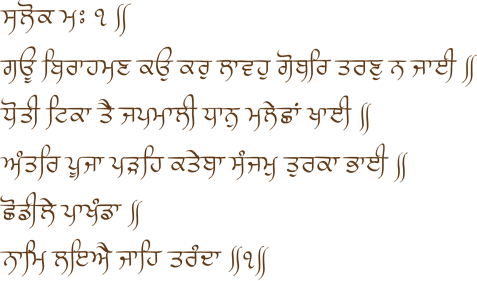 Guru Nanak begins the first verse by calling out the Hindu officials of the time, who served as officials of the Mughal (Muslim rulers) administration. These Hindu officials, agents of the Muslim state, levy taxes on cows and Brahmins, and at the same time, believe that the sacred thread prepared by the Brahmin, and the cow dung produced by the cow, can make them pure. Guru Nanak addresses these Hindu officials and says that applying the cow dung to cooking squares to make them pure and holy will not free them from anything. The Guru goes on to say that on the one hand, these officials wear a loincloth around their waist, apply a mark on their foreheads, and hold a rosary in their hands when reciting their mantras (all of the things that denote their Hindu-ness and religiosity), but on the other hand, they eat food given to them by the same Muslims they call dirty and impure within their religious frameworks. They worship deities as per their religious tradition inside their own houses, but outside of the house, they read the Qur’an and practice Islamic discipline.

Guru Nanak says, shame on your garbs and your marks, the things you put on to fulfill the performance of your religiosity, as you benefit from the system run by the very people you consider dirty and impure. When you are among your own crowd, you invoke the highest form of your religiosity, but in the ruling class, you use their system, and bow to them, flattering your employers and attempting to display loyalty by adopting their modes of life and reading their scriptures. You practice purity in the private square and lack it in the public square. How can your uniform and your rosary (that you put on to perform purity), which was bought with impure money, ever be pure?

Guru Nanak is addressing the pretenses we all put on in our various capacities, in our various roles within our own contexts, and urges us to give up these pretenses. Our lives and certain objects or outward identifying markers or rituals will not purify us from our hypocrisies. If we are working within corrupt systems to our own benefit at the cost of others — especially at the cost of those people who we go home to at the end of the day, those we claim to identify with — if we think that those two opposing versions of us can exist, we will never be able to cleanse ourselves from the inside, no matter how many boxes we check. We will still be trapped by our hypocrisies, and pretenses, devoid of true freedom. The only way to be able to swim across this world-ocean, the only way to get free is through Identifying with 1Force (One Universal Integrative Force, also referred to as 1-Ness).

On the one hand, you Hindu officials, working as tax collectors for the officials of Muslim administration, levy taxes on cows and Brahmins, and on the other hand, you believe that the cow’s dung and the janeu prepared by the same Brahmin can make you pure; but by applying a layer of cow dung to the cooking square, swimming across this world-ocean is not possible.
On the one hand, you wear a loin-cloth around your waist as per the Sanatan tradition, apply mark on the forehead, and hold a rosary in your hand for the recitation of mantra, but on the other hand, you eat food given to you by the same Muslims you call uncivilized.
O Sibling! You worship deities as per the Sanatan tradition inside your own house, but when outside of the house, you read the Quran and practice Islamic discipline.
Give up such pretenses. You will swim across this world ocean only by Identifying with IkOankar (reciting Nam) with a true heart.

(You Hindu officials, on the one hand) levy tax on the cow and Brahmin; (while on the other hand, believe that the cow’s dung and the janeu made by that Brahmin will purify you; but by coating the cooking square) with cow dung, swimming across (the world-ocean) is not possible.
(On the one hand you wear) loin-cloth, (apply) mark (on your forehead), (hold) rosary (in your hand as per sanatan tradition); (but on the other hand, you) eat food (given by those Muslims you call) uncivilized (malech).
O Brother! (You) worship (deities) inside (your own home, but outside of your home you) read semitic texts (and practice) discipline of Muslims.
Forsake pretenses. (Only) by reciting Nam, you will swim across.

Through simple vocabulary, this salok questions the hypocrisy of the Hindu society of that time, which was busy pleasing the Muslim rulers. It states that only by reciting the Nam (Identifying with IkOankar), and by giving up all pretenses, one can swim across the world-ocean.

The line ‘choḍīle pākhanḍā’ (forsake pretenses) is smaller and different from the other lines. The first three lines detail different types of hypocrisies, whereas this small line clearly states that one must give up such hypocrisies, a clear deflection both in form and meaning.

The meter convention of the first three lines of this salok as per the vocabulary and pronunciation is 16+12. Although the first line has 17+12 meters, and the second line has 15+12 meters. When ‘ṭikā’ is pronounced as ‘ṭikkā’ then this also becomes 16+12 meters. These lines can be categorized under a four line verse with 16+12 characters each (harigītikā chand). There are 12 meters in ‘choḍīle pākhanḍā’ and 15 meters in ‘nāmi laïai jāhi tarandā’ (by reciting Nam, you will swim across).