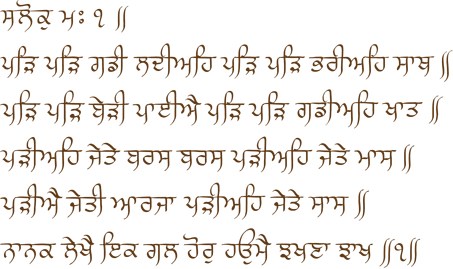 Guru Nanak shifts the conversation from the personal discovery of inner truth in the previous ballad to the ways in which we attempt to connect with that truth. Most people do what we are all taught from a young age to do if we are searching for answers or meaning or knowledge — we read, we learn, and we read some more. Guru Nanak quantifies this endless search for knowledge, to make the point that despite the value in seeking knowledge, in being hungry to learn, the ending point cannot be that we have ingested as much knowledge as we can, or read as many books as there are days in a lifetime. Guru Nanak is asking us to think about the thing that comes after — what is our goal? Are we getting there?

There are many people who become very smart, who soak up knowledge like a sponge and spend every waking moment learning more and more, who become intellectuals who are good at proving their points, good at debate, good at displaying all of the things they have learned. But if all we are going to do is read and read and read, without any kind of direction other than flexing our own intellectual ego in front of other people, then maybe what we are doing is wasting our time.

Guru Nanak asks us to think about this, and says that even with all of that knowledge, if we have not understood that one thing, everything else is just frustration and ego. Reading and learning and building our knowledge is great, but if we have not figured out that one thing, we will remain dissatisfied and frustrated. This is not to say that those things are not worth pursuing. But a directionless pursuit of knowledge is futile. That one thing will give us the direction that allows us to take all of our learning and do something with it. Do we know what that one thing is?

Different types of parallelisms have been beautifully employed in this salok. For instance, ‘paṛi paṛi’ (having read unendingly) has been used four times in all, in the beginning and middle of the first two lines. In the third and fourth line, this has changed into ‘paṛiahi’ (even if are read/studied). The fourth line starts with ‘paṛiai’ (even if are read/studied). The repeated use of ‘paṛi paṛi’ and ‘paṛiahi’ depicts the futility of useless education. Additionally, there is structural parallelism.

Because of these parallelisms, a specific aural effect is being induced.

In the third line, the words ‘baras baras–mās’ (years after years-months), and in the fourth line, the words ‘ārjā–sās’ (age-breath) have been repeated, which complement each other. By employing isomorphic semantic parallelism, the practice of engaging in futile education for a long period of time has been critiqued.

Thus, in the first two lines, too much education, and in the third-fourth line, futile education acquired over a long period have been described as useless. The Guru has made it clear that there is no point continuing acquiring futile education in large quantities over an extended period of time.

The first line presents the crux of the entire salok, that the only thing worth engaging in is enshrining Nam in the heart. Everything else is like wasting time in acts of egoism. There is discourse rareness here.

The words ‘jhakhaṇā jhākh’ (engaging in nonsensical blabbering) form a satirical colloquial expression. It is a sharp satire on futile education by employing a proverb.

Because of the repetition of the letters ‘ha,’ ‘jha,’ and ‘kha’ in the words ‘horu haümai jhakhaṇā jhākh,’ there is alliteration.