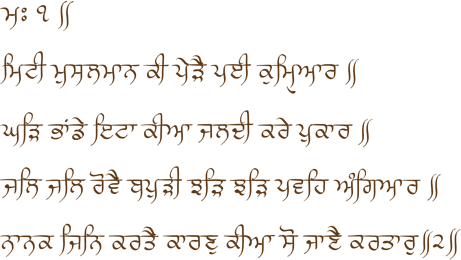 Guru Nanak draws a contrast between practices of the two major religious groups: Hindus and Muslims. At the time, Muslims were making fun of Hindus for their practice of cremation, wondering how they would ever get salvation if their bodies were burned away. Guru Nanak sarcastically points out that when the body disintegrates overtime after being buried, that body goes back into the soil, and becomes a part of the clay that is eventually used by potters to make different vessels and bricks. Those vessels and bricks are then baked in the kiln, another form of burning. So, Guru Nanak says, those bodies that are buried and not burned are eventually burned as well.

The statement being made is that we can fight about all of these things — which is better or worse, which will get us mental, physical, and emotional freedom, and which won’t. We can separate ourselves, see everything in terms of separation, and fixate on particular rituals in an attempt to assess their value in relation to one another. But if we are in sync with 1Force, if we feel the 1Force, we become one with the Creator. If we change our behaviors, we become like the Creator, and we see that the question of heaven and hell, the attempt to assign a value to various rituals in competition with one another, is futile. And instead, we focus on becoming one with 1Force and feeling 1Force in our day to day lives.

Every community does this — not just religious communities. We often think that because we do something one way we must make it a requirement for everyone. But, Guru Nanak says, these things are not universal in nature, and they cannot be used as a basis for judgment of other people.
Soil of the Muslim’s body, who had been buried in the grave, ended up in the ball of clay kneaded by the potter to make pots.
The potter molded that clay to make vessels and bricks, and put them in the kiln to bake. Now, the clay wails while being baked as if asking, ‘why am I being burnt in fire?’
The pitiable clay cries while being baked in the kiln; embers shed off and fall from it.
Nanak! The Creator who is the cause of creation, and the origin of the world, alone knows what will happen to an individual after death.

Soil of the (body of) Muslim (who had been buried in the grave), fell into the (clay) ball of the potter.
Having molded (the clay, the potter) made vessels (and) bricks (from it); (now while) burning (in fire), it wails.
Having burnt continuously, cries the pitiable (clay); having shed, embers fall down (from it).
Nanak! The Creator who has created the origin, that Creator knows.

In the first line of this four line salok, there is alliteration due to the repetition of the letter ‘ma’ in ‘miṭī musalmān’ (soil of the body of Muslim) and the letter ‘pa’ in ‘peṛai paī’ (fell into the clay ball). In the second and third lines, imagery of the sterile object ‘miṭī’ has been created, which is crying and wailing due to being burnt in fire. Crying and wailing is the nature of living beings. The soil burning in fire is not a living being, but is behaving like a living creature. For this reason, there is the use of semantic deviation and personification.

The repetition of words in the structural formation of the third line (‘jali jali rovai bapuṛī’ and ‘jhaṛi jhaṛi pavahi aṅgiār’) lends structural parallelism, which, through the imagery of scorching and burning and the use of alliteration, evokes vocal and poetic splendor.

In the fourth line (nānak jini kartai kāraṇu kīā so jāṇai kartāru) the letter ‘ka’ has been repeated multiple times. Consequently, alliteration has been used here as well.