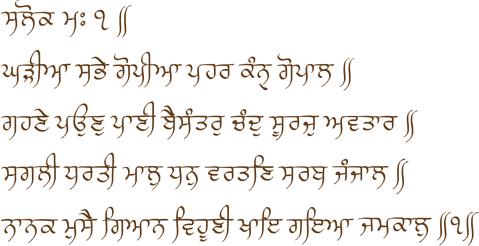 Guru Nanak uses the common elements of theater and performance in the context of the stories of the various avatars in Hinduism to present the earth as a theater house, and all of the happenings in the world as a play. There is a comparison between the earthly theatrical performances that tell stories of Ram and Krishan and the larger cosmic play within the cosmic theater on earth. In the cosmic theater, the units of time that exist within the cycle of day and night are the actors, and natural elements on earth, like air, water, and fire, are the ornaments of these actors. The Moon and the Sun, rather than Ram and Krishan, are the incarnations, and the material objects and earthly dealings are the props from which entanglement comes.

Guru Nanak subverts the common experience and understanding of these plays about various incarnations to show how entangled people become in the theatricalities of the performance, distracted by the entertainment value. It is entanglement with earthly theatricalities that prevents us from seeing the larger Divine play, through which we can connect with Wisdom (the Guru, the one who brings enlightenment-light by dispelling ignorance-darkness). The earthly theater that is referred to, the theater that we look at, is entertaining for a moment, but does not give us anything in the long run. Instead, it creates fear, giving us prescriptions of what we must do to get what we want in this life.

Guru Nanak says that earthly theater is wisdomless and deceptive, and that in our trance, engrossed in material play and devoid of Wisdom, we do not even notice that death is eating away at us.

The Wisdom lies in nature, in shifting our focus to the Divine play happening all around us, in the elements, in the passing of time each day, in the moon and the sun as they rise and set.

All moments of day-night are like Krishan’s female companions (cow-maidens) dancing in the play of the formless One’s creation; all parts of day-night are like Krishan’s male companions (cow-herds).
All natural elements (air, water, and fire) are like ornaments worn by the female and male companions; the moon and the sun are like the incarnations of Krishan and Ram.
All material objects of earth are like the material wealth of the female and male companions; all worldly entanglement is like the usage of that wealth.
Nanak! Devoid of wisdom, the world is being deceived in this play. Jamkal, the fear of death, has and continues to eat away the world.

Note: This world is like a play (theater). The units of time like day, night, etc. are the characters of this play. Natural elements like air, water, fire, etc. are ornaments of these characters. The moon and sun are the incarnations in this play. The worldly objects are the riches of the characters and materialistic engagements are their dealings. Without the spiritual awareness of life, one is deceived by material allurements, and does not realize when death overcomes him/her.

All moments of day-night are cow-maidens; eight parts of day-night are Krishan’s cow-herds.
Air, water, and fire are the ornaments; the moon and the sun are the incarnations.
The entire earth is wealth; indulging (in it) is all material entanglement.
Nanak! Devoid of wisdom (the populace) is being plundered; Jamkal has eaten (it) away.

Thus, two different images have been created here, using a series of allegories. One image is of the phenomenon occurring in nature, and the other image is that of a play/drama being enacted on the world-stage. But, through both these images, the sense of a unique drama being played out in the vast theatre of nature, has been portrayed by the employment of a series of metaphors.

The fourth line contains both the climax and the closure of the play, because this point is an exposition where the mystery of the play is revealed. Individuals who are without spiritual wisdom are deceived in the play, and eaten by death in the form of Yama (the god of death). Even though the ending of the play appears tragic and pessimistic at the surface level, in practical terms, it holds within, the immense possibilities of transformation. The spiritual wisdom obtained from the Guru is the real enabler of these possibilities.

In this fourth line, the verb ‘musai’ meaning ‘‘is being plundered/deceived’ is used for the individuals who are caught in worldly affairs. On the other hand, the expression ‘khāi gaïā jamkālu’ (Jamkal has eaten them away) has been used for the people dying. The expression ‘ṭhagge jāṇā’ (to be deceived) is associated with a thug or deception, whereas ‘khā laiṇā’ (to eat) is a devouring act. Thus, here, through semantic deviation, these verbs have been used for ‘worldly indulgence’ and ‘Yama like death.’