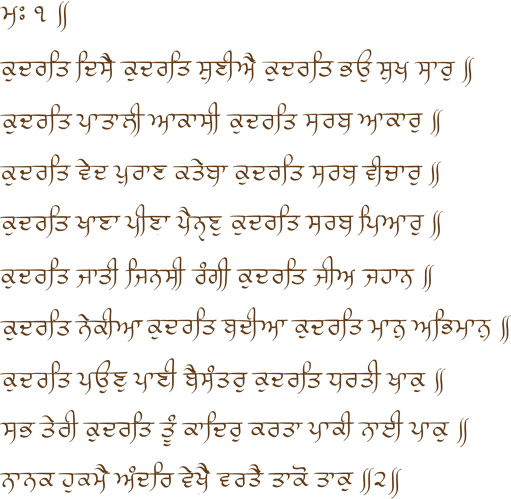 Guru Nanak describes the aesthetic beauty in creation, and the feeling of being wonderstruck at the things which are evident in creation itself, including in destructive forces. This is an elaboration on the 1-Ness of creation — and not just creation but also Divine power, nature, and the active and dynamic creativeness within creation.

This is not just an emphasis on the 1-Ness of creation, but also on the 1-Ness of the Creator and creation. The 1Force is very much actively involved in and pervading throughout creation. There is no separation as we see in other traditions, where the One fights to control the creation or preside over it. There is no fight here. The Creator is in the creation, and so the realm of creation is beyond the “sacred” and the “profane.” This is where both “hell” and “heaven,” are on earth, depending on whether or not one feels the 1-Ness, manifesting here in the world and in the unfathomable vastness beyond what we witness.

All of creation is carrying on under the Command and is taken care of by the Creator — there is nothing — not evil, not insult, not destruction — that falls outside of the realm of this 1-Ness.

Similar to the previous salok, parallelism has been used in this salok as well. The word ‘kudrati’ (creation) has been repeated sixteen times. The first and sixth lines are structurally similar, as are the second, third, fourth, fifth and seventh, resulting in morphological parallelism.

While, the words used in the first half of the second, third, fourth, fifth and seventh line depict various forms indicating particular phenomena, the words in the second half of these lines point towards the completion of these phenomena:

Similarly, ‘disai-suniai’ (is visible-is heard) words compliment each other in the first line, whereas ‘bhau-sukh’ (fear-happiness) in the same line, and ‘nekia-badia’ (virtues-vices) and ‘manu-abhimanu’ (honor-dishonor) in the second line contrast each other. Through this creative employment of parallelism and particular words, it is established that every object — every part of it and every sense that it contains — is a part of the creation, created by IkOankar.

The phrases ‘sabh teri kugrati,’ (all is Your creation) ‘tum kadiru karta,’ (You are the Owner and the Creator) ‘hukmai andari’ (in accordance with the Will) and ‘tako-tak’ (one alone) used in the eighth and ninth lines highlight the central meaning of the entire salok. All of creation and all of its parts are created by IkOankar. IkOankar is pervading the creation. The entire creation is operating under the Command. Thus, the beautiful phenomenon of ‘balihārī kudrati vasiā’ (I adore! The Creator is pervading the creation!) is visible in this salok.