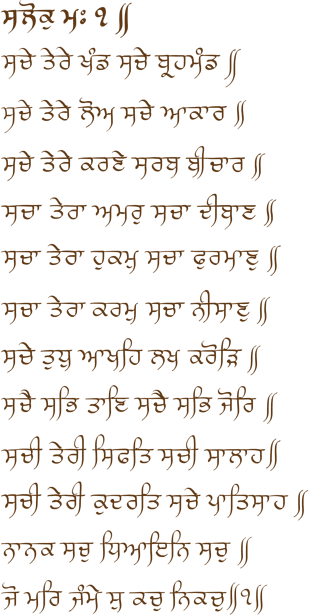 Guru Nanak opens by focusing on Truth and its various forms. This is about things being “True” with a capital T. When we think of something as being True, what we are really saying is that it will remain forever, unwavering and unchanging despite the passage of time, or any change in context. Truth really points to eternality. Ballad 1 was about the 1Force, or the One Universal Integrative Force (also referred to as the One and 1-Ness). In this Ballad, there is a clear progression into an elaboration on where 1Force manifests, and a focus on the permanence and eternality of the One, resulting in 1Force being referred to as the Eternal, or the Eternal One.

Guru Nanak begins with the realm of the tangible, explaining that the physical spaces we witness with our own eyes, the things that we see in front of us, the things that are evident to us — the cosmos, the forms that makeup creation — these are all manifestations of the eternal One, the 1Force.

The word “spaces,” speaks to the Eternal as well, and to the vastness of the 1Force. We have all felt some of that vastness in the tangible things around us. When we stand outside and look up at the stars, or crane our necks to get a good look at a full moon or watch the sun slowly rising every morning to create a unique combination of colors in the sky — anytime we are moved by the beauty of those things which are bigger than us, we get a sense of our smallness in the scheme of it all, and, in turn, the vastness of the spaces that exist beyond us. This is not to say that the eternality of 1Force translates into the eternality of those things we see far away in the sky, but it is to say that seeing glimpses of the cosmos and things that have greater permanence than we do helps us to understand our smallness. Looking at the tangible proof of things that have existed long before we have, and that will continue to exist long after we go, helps us to put our own timelines into perspective. Even if the world ends, even as the stars continue to die and be created, the vastness will continue to exist.

That eternality is fueled by 1Force — that is what makes it Eternal, or True. Every space we intangibly and tangibly witness and are aware of is because of the Eternal One — it is the eternal and is an embodiment of the eternal.

Later in the verse, Guru Nanak moves from a discussion of the tangible into the less tangible, or the things that are not necessarily evident. These less tangible things are Wisdom (or Guru, the one who brings enlightenment-light by dispelling ignorance-darkness), the idea of an Eternal Court, and Eternal Command. There are other courts in the physical world but they are all subject to time, to the coming and going. There are other commands in the physical world but the Command of 1Force is constant and timeless, moving all of creation.

From an elaboration on the intangible, we move into the more esoteric: millions and tens of millions are speaking of You (praising Your Eternal nature). It is through the Wisdom that 1Force is constant and permanent, manifesting even in the finite things around us. It is 1Force’s power and strength which creates all of the things previously mentioned (tangible and intangible), that we can also become true, or eternal.

Guru Nanak says that this power and glory of 1Force is eternal. We may come and go, living our human lives, and there will be a time when all of those who remember us have also gone from the earth. But 1Force will be remembered forever in the One-Self’s greatness, creation, and eternal sovereignty.

The verse concludes by stating that those who are focused on and consumed by the Truth, those who feel it — they are able to also become true (eternal). Yes, we are small and live finite human lives, but it is through the understanding that we are not separate from the 1-Ness that we too become eternal, removed from the phenomena of living and dying. Those who have not yet gained the wisdom to understand that paradigm of 1Force do not become a part of this eternality and are described as temporary, or unripe and immature. Those who become in sync with eternality are not worried about living or dying because they understand that they are a part of it (and that we all have the potential to be a part of this eternality).

Note: The entire process created by IkOankar essentially manifests the true embodiment of IkOankar. Praise of the eternal IkOankar helps one unite with the ‘Truth’ (IkOankar). Those who always remember IkOankar, the embodiment of Truth, or engage with the ‘Truth,’ they are liberated by living a righteous life. Those who engage with falsehood, they keep wandering.Both evident and inevident elements of creation are created by the Creator. Like the Creator, creation is also beautiful and awe-inspiring, because the Creator is pervading it. The Creator made the creation so that human beings (a part of creation) can experience the awe-inspiring evident elements of creation through the Guru’s door and merge with the ultimate-ecstasy while enjoying inner-bliss. From this perspective, the entire creation and all its cosmos, realms, worlds, forms, creatures, air, water, etc. which are subsisting in reverence of the Creator’s will, are True, as they have been created by the True IkOankar as manifestations or illuminations of the Truth. Anyone who, while experiencing this Truth, connects with the ultimate-Truth, eventually becomes the embodiment of Truth.

Seeing this from another perspective, everything that makes up the evident elements of creation is false because it is transient. This is a very subtle point. While witnessing the creation, if one remains conscious of the Creator, the creation seems to be the manifestation of Truth. But getting lost in the beauty of the creation and forgetting the Creator, the creation seems to be false, because it is transient and always changing. Guru Nanak Sahib has highlighted this fact in the tenth pauri of Asa Ki Var: ‘kūṛu rājā kūṛu parjā’ (false is the king, false is the citizenry).’

Thus, words like ‘sace,’ ‘sacā,’ ‘sacī,’ ‘sacai,’ etc, have been repeatedly used to this effect. Almost all of the lines (with the exception of the third, seventh and tenth) also have a grammatically symmetric construction. In these lines, words like ‘khanḍ-brahimanḍ’ (different parts of the cosmos-universes), ‘loa-ākār’ (regions-forms), ‘karaṇe-bīcār’ (deeds-thoughts), ‘amaru-dībāṇu’ (rule-court), ‘hukam-phurmāṇu’ (command-instruction), ‘karamu-nīsāṇu’ (grace-mark), ‘tāṇi-jori’ (power-strength) and ‘siphati-sālāh’ (admiration-praise) complement each other and manifest isomorphic semantic parallelism. But, in the eleventh through twelfth lines, antonyms like ‘sacu-kacu’ (true-false) are used to produce the effect of antagonistic semantic parallelism by introducing deflection in this style. Through these poetic tools it has been made clear that those who remember the true Sovereign, are true, and those who do not, are false.

By employing parallelism, it has been highlighted that IkOankar is true, and all the parts of the creation created by IkOankar are also true; they outline the truth. Additionally, this parallelism also produces a special rhythm and resonance. Although the tenth line, ‘sacī terī kudrati sace pātsāh, (true is Your creation, O true Sovereign!)’ has been used only once in the entire salok, it still offers a summary and provides the fundamental meaning of all the lines. Here, syntactic rareness has been used.