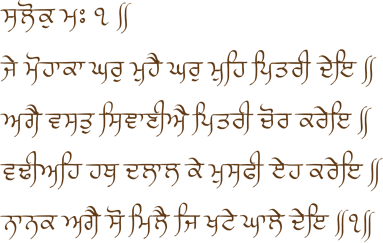 Guru Nanak writes about the Hindu ceremony which is done to ensure that one’s ancestors are still living well in the afterlife, where the Pandit plays a particular role as the interpolator. But the ceremony is situated in the context of those corrupt elites who have stolen from the common people and offered their “blood money” or ill-gotten gains to their ancestors. Guru Nanak says that if a thief breaks into a house and then offers it to their ancestors, the thief is inadvertently turning their ancestors into thieves as well. If the Brahmin priest plays the role of religious interpolator in the ceremony with these stolen goods, the Brahmin is a thief as well. Thus, the responsibility for these ill-gotten gains lies on all three players (the thief, the priest, and the ancestors) involved in the ceremony, and all three players will be punished as a result. In fact, the middle man has a more drastic punishment, as they facilitate and, by virtue of their status, legitimize these kinds of false ceremonies and unethical transactions. We see this today, both in smaller individual cases and in the cases of powerful political figures, who through their actions show us corruption, who take money from lobbying groups, who perpetuate oppressive policies and further profit off of those policies, but who go through the “necessary” public ceremonies in attempts to cleanse their public image. They stand in front of large audiences with religious figures, they pray, they perform religious ceremonies, and it is not just them, but also the other two players (the religious figures who perform the ceremonies, and the audiences who accept those ceremonies as legitimate) who must take responsibility.

Guru Nanak is critiquing the way we perform ceremonies just for the sake of ceremony, especially when our offerings were not earned in an honest way — especially when corruption pervades our actions. Justifying unethical means to an end does not work. Going through the outward motions of ceremony with ill-intent or carrying evidence of bad behaviors with you to these ceremonies is a false way of paying respect to the ancestors, and any gifts in this life have no entrance into the world beyond. The fruits of our own labor and sweat do, and these are the things that matter in the hereafter.

If a thief, having robbed someone’s belongings, offers them as charity to a Brahmin during the ritual of shrādh done for the ancestors, then those stolen goods are discovered in the Court because the ancestors of those families from whom the goods were stolen are also present there. Thus, a thief who robs someone’s house ends up turning their own ancestors into thieves.
There, justice is delivered, the hands of the middleman-Brahmin who accepted these stolen offerings are cut off.
Nanak! Hereafter, one receives only that which one toils, earns, and gives in this world.

If a thief robs (a) house, (and) having robbed the house offers to ancestors (the stolen object as charity); (then) hereafter that thing is recognized, (and that person thus) makes (their) ancestors thieves.
(There, Dharam-Raj) does this act of justice (that) the hands of the middleman (Brahmin) are cut off.
Nanak! Hereafter that is received, what (one) toils, earns, and gives (while in this world).

Through impressive employment of symbolism, the salok addresses the pretentious Brahmin who collects offerings in the name of useless rituals like shrādhs (charity given for dead ancestors). In the context of the popular discourse, the salok warns that this cheating cannot be hidden from IkOankar’s justice; instead it is recognized for what it truly is. And it is not just those who directly cheated that are held responsible. It is also the ancestors receiving the offering and the middlemen Brahmins who profit off of such cheatings who are held responsible.

The last line of the salok is different from the first three lines both in terms of meaning and message. Therefore, there is semantic deflection here. The first three lines describe futile rituals done in the name of religion. In light of the principles of the Guru Granth Sahib, the fourth line clarifies that only what is earned through honest labor is of use in the court of IkOankar.

The meter convention of the first three lines is 13+11. The fourth line has 12+11; but in pronunciation it is 13+11. So this salok can be categorized under a two line verse/couplet with 13+11 characters each (doharā chand). Two doharās have been clubbed into one in this salok.