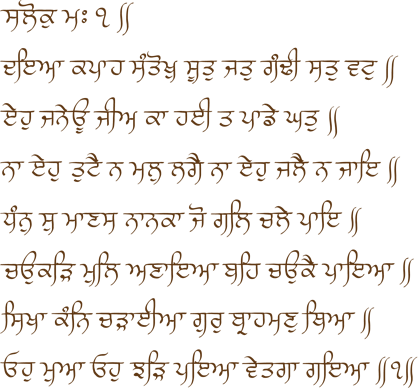 Guru Nanak discusses the ritual of the janeu (sacred thread) ceremony, situating us in the context of this practice for the rest of the ballad. When a Hindu boy of one of the three upper castes comes of age, a Pandit (priest) comes to the house and puts the janeu around the boy’s neck, recites a special mantra into the boy’s ear, and becomes the boy’s spiritual mentor. Guru Nanak addresses the Pandit and says that the real janeu is that which has compassion as its cotton, contentment as its thread, control over the senses as its knots, and truthful conduct as its twist. This is the janeu of virtues, which the Guru is asking for. This is the janeu the Guru will wear. This janeu of virtues is the one that does not break or get soiled, does not burn in fire or get lost, it does not disintegrate or burn up on the funeral pyre when we leave the earthly realm the way the physical janeu does. This is the janeu that the blessed ones wear, practicing IkOankar-like virtues (virtues of the One Universal Integrative Force, also referred to as 1-Ness or 1Force) in their day to day lives.

O Pandit! The real janeu is that, which has compassion as its cotton, contentment as its thread, control over the senses as its knots, and truthful conduct as its twist. If you have such a janeu of virtues, then put it around my neck; a janeu of mere cotton without these virtues loses its meaning.
Such a sacred thread neither breaks, nor gets soiled; neither burns in fire, nor gets lost. O Nanak! Blessed is the one who practices IkOankar-like virtues (wears this sacred thread) in life.
The Brahmin bought this sacred thread for four sea-shells, and while sitting in the cooking square of the client’s house, he put the sacred thread around the client’s neck. The Brahmin read a special mantra as an initiation teaching into the ear of the client, and thus became his spiritual mentor. When that client died, the sacred thread was burnt and fell down; thus, the client departed from this world without the sacred thread.

Cotton of compassion, thread of contentment, knots of continence and twist of truthful conduct. This is the janeu of the being; if (it) is (with you) O Pandit! then put it (around my neck).
Neither does it break, nor dirt clings (to it); neither does it burn, nor gets lost.
O Nanak! Blessed are those beings who walk, having worn (it) around (their) neck.
(The Brahmin) caused (the janeu) to be brought for the price of four sea-shells, having been seated in cooking square (of the client, he) put it (around the client’s neck).
A teaching was whispered into the ear, (and thus) the Brahmin became guru.
(But when) that (client) died, that (janeu burnt and) fell off, (and the client) departed (this world) without the sacred thread.

The first line of this salok employs metaphor. The words ‘daïā’ (compassion), ‘santokhu’ (contentment), ‘jatu’ (continence), and ‘satu’ (truth) in this line are the subjects of comparison (upmey). ‘Kapāh’ (cotton), ‘sūtu’ (thread), ‘ganḍhī’ (knot) and ‘vaṭu’ (twist) are the objects of comparison (upmān). Thus, a series of metaphorical imagery, or a sequence of metaphors, has been drawn. Through this poetic style, the Guru is describing the composition of the spiritual janeu in the backdrop of the outer physical janeu worn for show.

In the following lines, the specialities of this spiritual janeu have been listed by evoking simple linguistic expressions. It is explained that such a janeu neither breaks, nor accumulates dirt, neither burns in fire, nor gets destroyed.

The last lines of this salok employ both simple linguistic expressions and satire. The practice of wearing a janeu without acquiring virtues is questioned, and the janeu, which is worn while sitting around a cooking square, is described as being worth only four kauḍīs (sea-shells/cowries). Then, the teaching is whispered into the ear and the Brahmin becomes the Guru. But this outer janeu is destroyed with the death of the being, because of which the individual has to depart for the Divine court without the janeu (ve-taga).

This salok has a total of seven lines. The meter convention of the first and the third lines is 16+11, whereas, the meter convention of the second, fourth, fifth, and sixth lines is 13+11. The seventh line contains 16+10 meters. Therefore, this salok has been made with the combination of a four line verse with 16+11 characters each (sarsī chand) and a two line verse/couplet with 13+11 characters each (doharā chand).