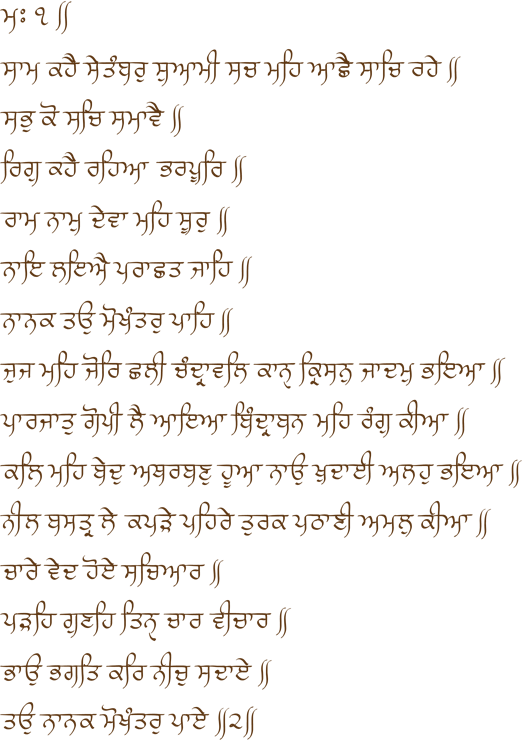 Guru Nanak focuses this verse on the four main Vedas in accordance with larger Hindu thought, looking at what knowledge is coming into play in each era, and what people believe at large. But the chronology of the Vedas is disrupted, as he starts with the Samved, which in Hindu thought is the fourth Veda.

When the Samved is invoked (associated with Satyug), the Divine wears only white. According to Samved, the white-robed Divine gives a sermon and says, always remain in the Eternal, the One who is always there, the One who is Self-sustained and Self-existent.

When the Rigved is invoked (associated with Treta age), it says that there is immanence, that the Divine is always present in the creation. This is where Ram comes into play, as the powerful entity to complete this cycle. Among the warriors, Ram claims that he is the one fulfilling what is mentioned in the Rigved. People of this time say that Ram is the greatest warrior in this context, and that by taking the name of Ram, identifying with Ram, becoming like Ram, one can be liberated.

When the Yajurved is invoked (associated with Duapur age), the character of Krishan is the focus. Guru Nanak invokes popular folklore and describes the character of Krishan and says that Krishan, who was part of the Yadav clan, used his power to pick up Chandravali in deception, took her away from her home and her husband, brought her to Vrindavan, and pressured her to enter into relations with him. This popular folklore is presented often as a romantic encounter, where the story is spun to paint Krishan in a more flattering light. Guru Nanak also mentions another popular folklore, about Satibhama, who was another one of Krishan’s maidens. Satibhama wanted the famous Parjat tree, known to fulfill wishes. So Krishan went to heaven and stole the tree from Indra, the king of the gods, bringing it down from heaven to earth. While Satibhama and Krishan were married, Krishan was pursuing Chandravali in deception. In both stories, which Guru Nanak mixes together, we see how power was used and misused, how misdeeds with Chandravali were justified or covered up with gifts to Satibhama, how stories like this get spun a certain way. We see this with powerful leaders today, who spin their own stories in ways that are more flattering, who distract the people they have wronged with gifts or status symbols or questions of what is factual and what is not. We see powerful people tell brazen lies, so that the masses fixate on these lies, exhausted with constant fact-checking. Guru Nanak is telling us that these dramas are going on and they are entertaining stories, but we must not get caught up in them. If we get caught up in them, we will focus on the drama itself. If we get distracted by debating facts, we will forget the larger picture.

When the Atharva Veda is invoked (associated with Kalyug), Guru Nanak says, I know your Ved says something else, but I am witnessing this age (this is when the Mughals have come to the subcontinent), and the name that matters is Allah and Khuda, these are the names commonly used for the Divine in this time. And instead of white, now the Muslims and the ruling classes wear Blue, the Turks and Pathans are ruling. Guru Nanak says, according to your system it is the Yajurved but the reality is that we are in the Kalyug.

It was believed that whoever read and reflected on these Vedas, their thoughts became noble and they attained liberation. Guru Nanak says, let us not say that these four Vedas have fulfilled their mission. Recounting past glories does not matter. We can read these and figure out how to get liberation for each era but we must reflect as well, resulting in behavioral change. This is relevant to what we see today, where we fixate on the literalism of any text, particularly religious texts, and allow that literalism to take over. Guru Nanak says, if we are really after freedom, we must live in humility, and exist in loving devotion of 1Force (IkOankar, One Universal Integrative Force, also referred to as 1-Ness).

Samved, which is considered to be associated with Satyug, states that the Owner is the one who adorns white clothes or is white in color (Svetambar or Hansavatar, the swan-incarnate). The Owner is located in the Truth and resides in the Truth. In Satyug, by virtue of speaking the truth and acting truthfully, everyone merges with the true embodiment of Svetambar, the swan-incarnate who is white in color.
Rigved, which is associated with Treta, states that Ram Chandar, the god-incarnate of the Treta age, is pervading everywhere. According to the Rigved, the name of Ram Chandar shines like the sun among the deities; by uttering his name all misdeeds are removed. Nanak! Only then do the beings obtain liberation.
During the time of Yajurved, which is associated with Dvapar, it is said that a god-incarnate named Krishna was born in the lineage of the Yadavs, who deceived a cow-maiden named Candravali using his power. He brought the wish-fulfilling Parjat tree for another of his cow maidens, Satbhama, and revelled in love with her in Vrindavan.
In the age of Kaliyug, Atharv-ved became prevalent, and Allah became popular as the name of the Divine. Turks and Pathans ruled, and under their influence, people bought and wore blue-green robes.
Thus, all four Vedas were accepted as true in their respective ages, and it is believed that whoever reads and reflects on them, their thoughts become noble. But, Nanak! If one stays humble while being in loving devotion of IkOankar, only then one can attain freedom. In the previous ages, rituals like chanting, austerity, restraint, pilgrimages, and fasting were considered great, but for this age, Nam, love, devotion, humility, are proposed as prominent virtues. One can attain liberation only by cultivating such virtues.

Samved (associated with Satyug) states, ‘Svetambar,’ the Master, is situated in the Truth and resides in the Truth. Everyone merges with the Truth.
Rigved (associated with Treta) states, (Ram, the god-incarnate) is all-pervading. The name of Ram (is like) the sun (supreme) among the deities. By reciting (his) name sins are removed. Nanak! Only then (do the beings) obtain salvation.
In the times of Yajurved (associated with Dvapar, an incarnation in the lineage of) Kanha Krishna Yadav was born (who) deceived Candravali using (his) power.
He brought Parjat (the wish-fulfilling tree) for the cow-maiden (Satbhama and) revelled in love in Vrindavan.
In Kaliyug, Atharv-ved was (prevalent), Allah became (popular as) the name of the Divine.
Having taken blue-green clothes, (people) wore robes; Turks and Pathans ruled.
(In this way), all four Vedas ended up being true (according to their times). (It is believed that those who) read and reflect (on them), their thoughts (become) beautiful.
(But) having practiced loving devotion, (if one) calls (oneself) lowly, Nanak! (Only) then (one) attains salvation.

In this salok, symbolism and indicators have been employed beautifully. By linking the four Vedas (Rigved, Samved, Yajurved, and Atharv-ved) with four ages (Satiyug, Treta, Dvapar, and Kaliyg) through simple linguistic expressions, the trends of various ages and the nature of the people in their respective ages has been described.

The last two lines of this salok summarize the meaning and inference of the previous lines from the Guru Granth Sahib’s perspective. The principle that is being proposed here is that only the one who engages in the loving devotion of the Divine while staying humble, finds the door to freedom.

All lines of the salok except the first two, have fifteen or sixteen meters. Consequently, they can be categorized under a four line verse with 16 or 15 characters each (caupaī chand).