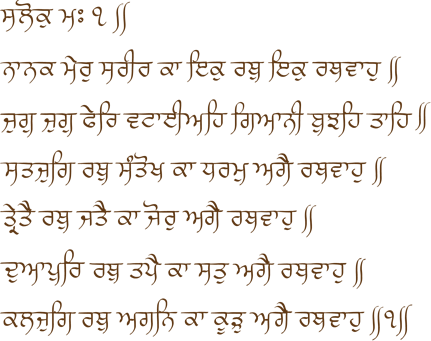 Guru Nanak begins the first verse of the ballad by situating us in the four eras according to Hinduism. The biggest mountain in Indian mythology is referenced, and Guru Nanak says, the body is the mountain. There is a chariot, and a charioteer for every era, and the charioteer that is driving it. In every era, the chariot remains the same. However, both the driver and what they are driving towards changes in every era. Guru Nanak situates us in this system but then gives us a unique understanding of the system.

Guru Nanak disrupts the traditional narrative and says that these eras keep changing and only the insightful can figure this out. It is not that these eras exist only in a linear timeline — it is that we exist in these eras, these states of existence or states of mind daily, depending on what we do, why we do it, and how we do it. Our behaviors throughout a day can take us through many different states of existence. There is daily disruption. Guru Nanak takes us out of time and eras and instead seems to be saying that we have the potential to live through all of these eras without one lifetime, or within one day, based on the things that drive us, the goals we have, and the ways we are driven to them. So what is it that drives us? What are we allowing to drive us?

Word ‘meru’ (Sumer mountain/superior most) used in the first line of this salok is symbolic. The meaning of ‘meru sarīr’ is ‘superior most of all bodies,’ that is, ‘human body.’

In the following lines of this salok ‘rathu’ (chariot) has been used for the human body and ‘rathvāhu’ (charioteer) for the soul (the being). Just like the charioteer drives the chariot, the body is driven by the being, and the being has complete control over the body.

In addition to pointers and symbols, metaphor has also been used in the next four lines. Different objects of comparison (upmān) have been employed for ‘rathu’ (chariot) and ‘rathvāhu’ (charioteer) for the different ages:

The composition of the meter of all the six lines in this salok is 13+11. Therefore, this salok can be categorized under a two line verse/couplet with 13+11 characters each (doharā chand), which is a salok made by combining three doharās.