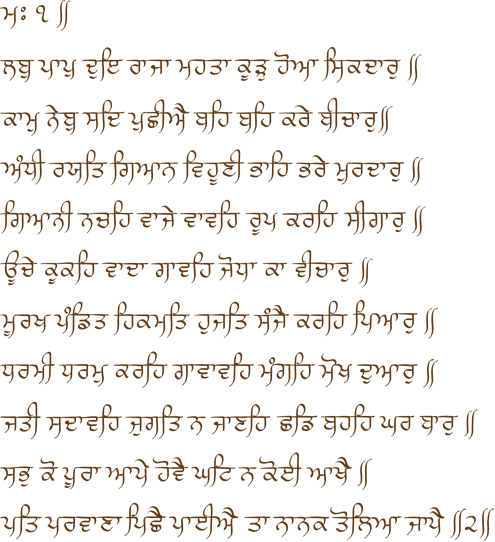 Guru Nanak explains in this verse why dyeing ourselves in devotion will work now in this age in comparison to the other systems of previous ages. The Guru describes the rampant hypocrisy in the world, how falsehood is operating in the political, religious, and social spheres, and how the result is that everyone is becoming false.

In this age, the kings, chieftains, and ministers are full of sin — so full of sin, in fact, that they are described by Guru Nanak as being the embodiment of sin. The Guru says, greed and sin have become the king and the minister, and falsehood has become the chieftain. Lust is their deputy, who is summoned and consulted. In this age, it is as if all of these vices sit together day after day, deliberating amongst themselves.

In this age, their ghost-like constituency is blind without wisdom, and we continue to fuel the fires of our temptations like a dead body to a funeral pyre. Everything is out of tune because of what the state and its agencies are doing, and what we are doing as constituents. We are dead in that we do not question, we do not speak up, we do not protest — we do not bear witness to the truth.

In this age, people who spend their time on theatrics, performing their ‘knowledge’ instead of actually being knowledgeable are considered wise or insightful ones. They dress up and sing and say loudly that they are the ones who can describe and decide who the brave are. They sing ballads of warriors but they are only putting on a show, talking loudly, saying all the right words, acting as talking heads and fooling the public.

In this age, the self-proclaimed scholars are foolish — they are only interested in accumulating wealth through clever tricks and vain arguments. These scholars were supposed to be custodians of knowledge and wisdom, their duty was to educate and guide others in virtue and principle, and they were depended on by the masses. But in this age, these same people have become ignorant and selfish hypocrites, who in their corruption, continue to knowingly mislead the masses.

In this age, those who claim to be virtuous and engage in righteous deeds ask for others to sing their praises. They ask for freedom but they are the ones who are losing it, bound by their need for praise and by the karmic point systems they have created in their heads — the true motivation behind every ‘good’ action.

In this age, those who say they practice restraint do not know how to truly be restrained or how to engage in truthful conduct. They abandon the life of a householder, thinking it is enough, and criticize those who engage in daily life.

All of these various kinds of people claim to be the complete ones, but if their actions were to be measured on a scale in comparison to the words that come out of their mouths, we would find out who is really complete. The people who are complete, Guru Nanak says, can be found by measuring the honorable lives they have supposedly lived.

Under the influence of Kaliyug, it is as if greed and transgression have become the king and the minister and falsehood has become the chieftain.
It is as if lust is their deputy, who is summoned and consulted. Seated together, the various vices like greed, deceit, lust, etc. frequently deliberate amongst themselves.
Devoid of wisdom, the ignorant public, with dead conscience, continues to fuel the fire of their temptations.
Those who consider themselves wise, perform and dance in the rās līlās (play of aesthetics/dance of love by Krishan and the cow-maidens, his beloved friends), while their disciples play musical instruments. They wear different kinds of costumes and adorn themselves. They cry out loudly, sing narratives of battles, and reflect on the tales of bravery of the warriors.
Those self-proclaimed scholars are foolish and only interested in accumulating wealth through clever tricks and vain arguments.
Those who call themselves virtuous engage in righteous deeds, but make others sing the praises of their actions, and ask the Divine for salvation.
Those who consider themselves celibates, do not know the way of self restraint and truthful conduct, and abandon the life of a householder, thinking that is enough.
Everyone considers themselves to be perfect and accomplished; no one considers themselves inferior.
Nanak! If the weight of actions performed is placed in one pan of the weighing scale, and the weight of honor received by them in IkOankar’s court is placed in the other pan of the scale, only then, by weighing them, will it be known who will be accepted in IkOankar’s court (who is complete and who is incomplete).

Note: The verses above expose the ills that society was suffering from, during the days of Guru Nanak Sahib. The rulers and their deputies were cruel and indifferent to the sufferings of the subjects. They were greedy, egoistic, without any sense of justice and had many other vices. They had become synonymous with greed, sin and lust. These negative traits were ruling their minds. Deprived of proper education and knowledge, the populace was ignorant and as good as blind (who can’t be led in any direction). People were conducting themselves like cowards, unable to react, as they would have really wished, because of fear and helplessness. The Guru warned people of such injustices and extolled the values of good leadership, education, and sense of self-esteem, vital for dignified living. –Adapted from https://awordathought.com/mahtaa/

(It is as if, under the influence of Kaliyug) greed and sin (have) both (become) the king and the minister; and falsehood has become the chief.
(It is as if) Lust (is their) deputy (who) is called and asked; (thus this group of vices) having frequently seated, reflects.
Devoid of wisdom, the blind citizenry, like a dead fuels the fire (of their craving).
(Those who call themselves) wise dance, play instruments, wear (different kinds of) costumes, (and) adornment.
(They) shriek loudly, sing narratives (of war, and) reflect (on the valor of) the warriors.
Foolish Pandits love to accumulate (wealth) through cleverness and vain argument.
(Those who call themselves) virtuous practice righteousness, make (people) sing (their praises), (and) ask the Divine for the door of salvation.
(Those who) call (themselves) celibates do not know the way (of celibacy, and), having forsaken household, sit (idly).
Everyone becomes perfect by own-self, no one calls (one-self) lesser.
If the weight (of) honor (earned through actions) is placed in the rear pan (of the scale), then, Nanak! It will be known by weighing (who is complete and who is incomplete).

Here, an imagery of a royal court has been used. Greed has been described as king, transgressions as minister, and falsehood as the chieftain. All of them sit with lust as the deputy and deliberate together. A miserable state of the world has been painted through this imagery. The literary scheme of using metaphors in a row to create a new imagery is called sequence of metaphors.

Word ‘andhī’ (blind) has been used as a symbol for ‘giān vihūṇī rayati’ (citizenry devoid of wisdom) in the third line, through which, it has been clarified that the ignorant world cannot see/realize or understand anything.

The degraded condition of the society has been described in the next five lines through simple linguistic expression. The self proclaimed wise people dance, play instruments, put on costumes, and ornaments impersonate and sing the narratives of the warriors loudly. The foolish Pandit is engrossed in accumulating wealth through clever means and arguments, the religious individuals are wasting their noble actions by a self-acclaimed popularity though still aspiring for salvation, and those who call themselves celibate, do not know the right way, and therefore, they have forsaken family life.

The ninth line sums up these five lines and explains that all of them consider themselves to be capable and proficient, and no one considers themselves to be inferior in any way. Satire has been effectively used in these lines.

The tenth line of this salok is symbolic. Only when the ‘pati’ (honor) like ‘parvāṇā’ (weight), that is, a weighing stone of honor is placed in the rear (other) side of the scale, one knows how religious a person is. Here the scale refers to the evaluation at the Divine court.

Additionally, alliteration is present in ‘pati parvāṇā pichai pāīai’ (weighing stone of honor is placed in the rear (other) side of the scale).

This salok can be categorized under sarsī chand, which has twenty-seven meters (16+11=27). It has ten lines. Same standard of meters has been used in these as per the pronunciation or meter convention.