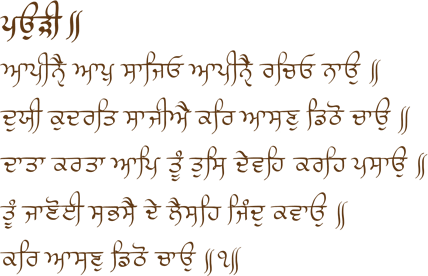 Guru Nanak commences the ballad in a self-reflexive theme, where the ideas we may have about any separation between ourselves and the One are challenged. The Self created the self. The One created the 1-Ness. The One created the 1-Identification, or Nam — the ways in which we identify with, connect to, and experience the One. The One pervades through all of creation, and there is no other. The ideas that we may have about this separate Creator above us and presiding over all that happens on Earth are challenged. This is not about humans as small and insignificant beings versus the One as the separate big and important ruler over all things. The One is fond of creation and is excited to be in the creation. With the Wisdom, we can begin to understand that the One is among me, among you, among all of us. This is Oneness, 1-Ness.

The uniform structure and use of words with similar grammatical forms in this pauri introduces a special rhythmic resonance and meaning. The words ‘sājio’ (created) and ‘racio’ (crafted) in the first line and ‘devahi,’ ‘karahi,’ and ‘laisahi’ in the third and fourth line on the one hand create a remarkable flow, and on the other, point towards the infinite and eternal powers of IkOankar. “You are the Creator (sājio), the Crafter (racio), the Bestower of all things (devahi), Creator of the world (karahi) and take away everything in the end (laisahi).” Through these words, the infinite and comprehensive powers of the Creator have been described.

In the third and the fourth line, ‘pasāu’ and ‘kavāu’ are used, which point to two more powers of IkOankar, ‘extending grace/expanse’ and ‘ordering.’ In the first and the second line, the use of ‘nāu’ and ‘cāu’ also represent IkOankar’s ‘Nam’ and IkOankar’s delight towards Ownself’s creation respectively.

In the first half of the third line, the words ‘dātā’ (bestower) and ‘kartā’ (creator) have been used, followed by directly related words, ‘devahi’ (they give) and ‘karahi (you create) in the same sequence in the second half to produce a special effect. In fact, all of these words depict the exceptional powers of IkOankar. The similarity in the form displays the oneness of IkOankar’s powers and draws attention to their uniformity.

The use of the line ‘kari āsaṇu ḍiṭho cāu’ (having established Your seat, You witnessed with delight) is also extremely creative. The Creator adores the creation and pervades in it, watching all of the affairs of the world delightfully. Here, through a natural expression, the fact of IkOankar’s pervasive nature has been described. ‘Because of the usage of an expression different from its usual meaning,’ there is a presence of ‘allegory’ here.

At the end of the pauri the same line has been used for the second time. The repetition emphasizes that IkOankar alone is the Creator of this world, who pervades the entire creation and under whose Command all things exist.