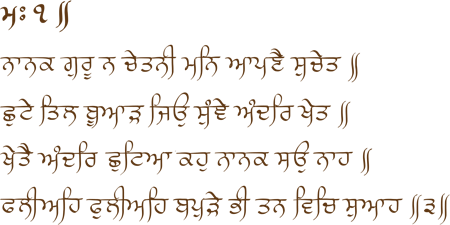 Guru Nanak continues to stress the importance of the Wisdom in human life. Individuals without the Wisdom, despite being seemingly wise, successful, and accomplished from a worldly perspective and standard, stay spiritually fruitless (without virtues) within. The message here is largely about the pretenses of “religious” people or those who think they have all the answers but who do not have wisdom in their consciousness. In our day to day lives, it is easy to fall into a sense of self-importance, pointing to all of the things we have had success in as justification for our own arrogance, but without the Wisdom, our lives cannot truly be enlightened or be fruitful. We may look like the sesame plant that is flourishing — we may blossom and flourish outwardly in the ways we have deemed to be signifiers of success in this world. But within, we have dried out and become ash, left abandoned in an empty field, at the mercy of hundreds of masters, slaves to the many negative worldly tendencies, and used by those who take advantage of us.

Salok revealed to the First Embodiment, Guru Nanak Sahib.
Nanak! People who consider themselves to be intelligent in their own minds, and do not contemplate the Wisdom (Guru), are like the rotten sesame plants, isolated and abandoned in the field.
Nanak’s Statement: The rotten sesame plants abandoned in the field do not have a single owner. They are at the whim of hundreds of owners, who, according to their own needs, will use them as they please.
Although those unfortunate sesame plants flourish and frutify, there is still only ash in their pods (bodies). Their potential for growth has been destroyed.

First Embodiment.
Nanak! (People, who) do not remember the Guru, (and) are clever in their own mind, (are) like the rotten sesame plants left isolated in the field.
Nanak’s Statement: (There) are hundreds of owners of those abandoned in the field.
(Though) the pitiable frutify (and), flourish, still (there is only) ash in (their) body.

The incomparable importance of the Guru’s teaching is highlighted in the above saloks through the use of simile. The First Sovereign reminds us of those who do not remember the Guru, and who think they do not need to pay attention to the Guru’s teachings. They consider themselves to be awakened and wise, but then become like the rotten sesame plants in an empty field. They may flower and flourish, but their seeds contain only ash. Here, the individuals bereft of Guru’s teachings have been compared with the pitiable state of the rotten sesame plants whose seeds have become ash, left abandoned in the empty field, existing under the control of the whims of hundreds of masters.

In the first line, the word ‘sucet’ (clever) has been used as satire, suggesting that those people who do not follow the Guru’s teachings remain in an illusion, thinking themselves to be ‘sucet’ (clever), whereas in reality, they are not so.

Use of ‘saü nāh’ (hundreds of masters/owners) is also important. The sesame plants standing abandoned in the fields are at the mercy of hundreds of masters. Meaning, those individuals who remain without the Guru’s grace become slaves to several negative worldly forces. Therefore, the word ‘bapuṛe’ (pitiable) has been used appropriately for such hopeless individuals.

‘Phalṇā-phulṇā’ (to fruitify-to flourish) is a popular idiom. Because ‘phalīahi-phulīahi’ (they fruitify-they flourish) has two meanings, there is a presence of ‘pun’ in addition to a ‘proverb.’ In the context of the sesame seed plants, it means to flower and fructify. In the human context, it means being successful in terms of wealth and worldly success.

In the same context, the use of the word ‘suāh’ (ash) is also very creative. No matter how much success people may taste in terms of wealth, without the Guru’s teachings, their every achievement is trivial, like ash. Through subtle use of analogy and signs, there is an apt visualization of the destitute state of such individuals, their surrender to negative worldly tendencies, and the worthlessness of their achievements, despite worldly success.

As per the vocabulary and articulation, the meter convention of the four lines of this salok is 13+11. This can be categorized under a two line verse/couplet with 13+11 characters each (doharā chand). This salok has been formed by combining two dohare (two line verses/couplets).